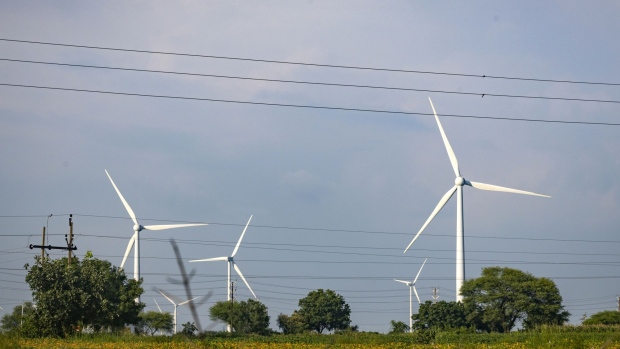 (Bloomberg) -- India unveiled a 2.44 trillion rupee ($29.6 billion) plan to build transmission lines to connect renewable generation, as it aims to nearly triple its clean-power capacity by 2030.

The project will connect solar plants in the sun-drenched deserts of Rajasthan and Gujarat and wind farms in Tamil Nadu to the national network, the power ministry said in a statement. It will help boost India’s inter-regional transmission capacity from 112 gigawatts to 150 gigawatts by the end of the decade.

A lack of transmission lines has held back renewable electricity in India. As the nation embarks on its path to net zero by 2070, it needs to address this shortfall so that clean power can flow to urban and industrial hubs that are often far from generation sources.

India has a generation capacity of 173 gigawatts from non-fossil fuel sources and plans to almost triple it to 500 gigawatts by 2030. The transmission plan includes building transformers and high voltage lines to carry power long distances, as well as laying submarine cables to ship electricity from offshore wind projects.

The power networks sector welcomed the plan, but sounded a note of caution on how contracts will be awarded. Private transmission companies have been lobbying New Delhi to allocate all projects through competitive bids, rather than the current practice of giving some to state-run Power Grid Corp. of India Ltd. without competition.

“The plan presents a very large opportunity to the industry and is absolutely crucial to India’s renewables ambitions,” said Vijay Chhibber, director general at lobby group Electric Power Transmission Association, which represents the private network companies. “What we still need is a complete clarity on how these projects will be awarded.”