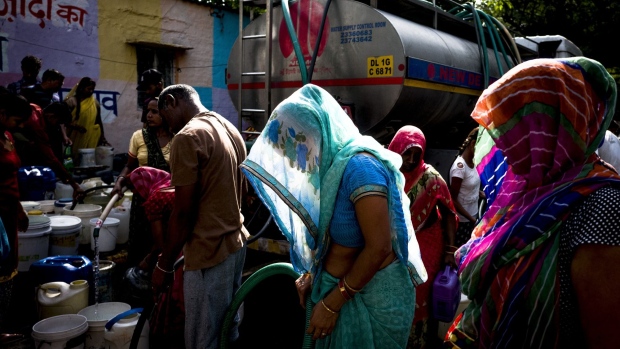 Residents fill water from a Delhi Municipal Corp. truck in New Delhi, India, on Saturday, April 30, 2022. India is experiencing a heat wave, with the country’s average temperature reaching almost 92 degrees Fahrenheit (33 degrees Celsius) in March, the highest on record for the month since authorities started collecting the data in 1901. , Bloomberg

(Bloomberg) -- India warned of heatwaves in six states next week, as extreme weather conditions threaten lives and livelihoods across the subcontinent.

Heatwaves are likely in parts of Haryana, Rajasthan, Madhya Pradesh and Maharashtra for four days starting Sunday and in parts of Uttar Pradesh and Punjab for three days from Monday, the Indian Meterological Department said in a statement Saturday. It also said a cyclone will cross near the country’s eastern coast by May 10.

Record-high temperatures have been persisting in India in recent weeks, increasing demand for electricity to run air conditioners at a time when power plants are facing acute coal shortages. Authorities in some regions have been cutting off power supplies for as long as eight hours a day. Heat waves could also delay wheat harvests and hamper industrial activities before some respite arrives with the monsoon in June.