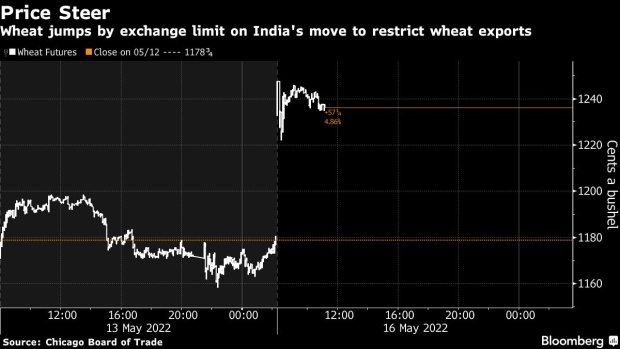 Workers unload wheat sacks from a truck at a Punjab Grains Procurement Corp. facility in the Ludhiana district of Punjab, India, on Sunday, May 1, 2022. A blistering heat wave has scorched what fields in India, reducing yields in the second-biggest grower and damping expectations for exports that the world is relying on to alleviate a global shortage. Photographer: T. Narayan/Bloomberg , Bloomberg

The country prohibited wheat exports, citing food security risks after a record heat wave slashed production and drove up prices. India will continue to make grain available to nations at the request of their governments, while shipments for which irrevocable letters of credit have been issued will also be allowed.

The move has “many devils in the details,” said Tobin Gorey, a strategist at Commonwealth Bank of Australia. “We suspect that will create an initial flurry of trading but the market will take some time to assess the details.”

Egypt, one of the world’s top wheat importers, said Sunday that its government purchases are exempt from the curbs. It has agreed to buy 500,000 tons of wheat from India, which it recently approved as an origin for imports.

“This doesn’t mean the world fully loses Indian wheat exports, but it will change trade flows and likely reduces India’s export volumes,” said Dennis Voznesenski, an analyst at Rabobank in Sydney. Harvests from Europe, North America and Russia will start to become available soon, which will alleviate supply tightness in the physical markets and ease inflationary pressures.

India’s move is a big deal in that it signals an increasing amount of trade is moving to a government-government model, where food to an even larger extent will be used as a political instrument, Voznesenski said. “Instead of wheat moving to where the highest bidder is, it will move to where the government decides for it to move,” he said.