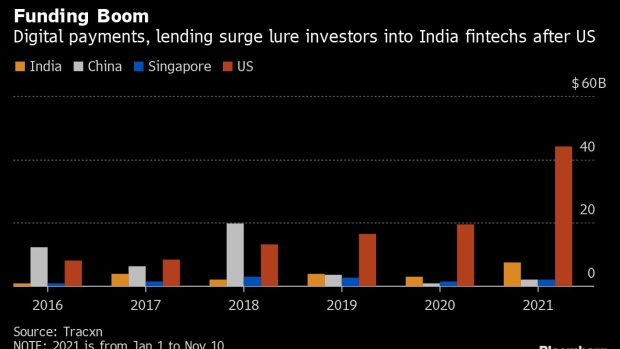 (Bloomberg) -- Bankers in India risk losing out large parts of their traditional business to global tech giants as Google Pay and Walmart-backed Phonepe boost control of the nation’s retail digital payments network, according to Uday Kotak.

Banks will need to scale up technology, hire more and focus on a customer and not sales-centric approach to match competition from the deep-pocketed tech firms, Kotak, founder and chief executive officer of Kotak Mahindra Bank, said at a forum Friday, organized by India’s International Financial Services Centres Authority and Bloomberg.

“Bankers were short-sighted over the last three years,” he said. “Their standard response was ‘oh, there is no money in payments.’”

India is emerging as one of the most attractive digital services destinations in the world for investors and companies after China’s curbs on its technology sector. Indian fintechs received about $7.6 billion of venture capital funding this year through early November, nearly fourfold that of China, according to research firm Tracxn.

Online retail payments on India’s Unified Payments Interface -- the unique open-to-all fintech platform -- have grown fivefold in the last two years with transactions touching a record $100 billion in the month of October.

While the platform connects more than 260 banks and 21 third-party apps, Google Pay and PhonePe enjoy more than 85% of the payments traffic, ending up with the maximum share of customer data. Tech giants including Meta Platforms Inc. and Amazon are entering India’s lucrative financial services sector offering products from loans and insurance to deposits -- the key bastion of traditional banks.

And it’s not just them. Hundreds of fintechs are mushrooming in India to take advantage of the digital lending space estimated to swell to $350 billion by 2023.

That kind of monopoly and control over data along with severe competition among hundreds of growing fintechs to collect information from customers must be closely watched by regulators for any potential financial and systemic risks, Kotak said.

Kotak, with a net worth of $16 billion, ranks as the world’s richest banker according to the Bloomberg Billionaires Index.

“We need to make sure in the name of data competitive service, we don’t have systemic and stability challenges,” he said.