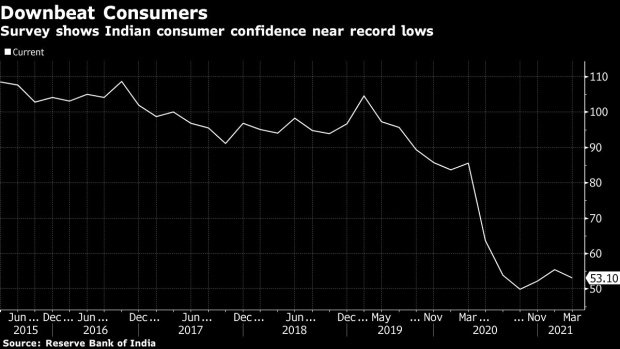 A wholesale market in Patna, Bihar, India, on Friday, Feb. 26, 2021. After falling into a coronavirus-fueled recession in the third quarter, India's economy has likely returned to expansion in the three months ended December, according to the median estimate in a Bloomberg survey of economists. Photographer: Anindito Mukherjee/Bloomberg , Bloomberg

(Bloomberg) -- Indian consumers turned more pessimistic about the present and less gung-ho about the future, making them less likely to spend big in an economy that’s driven by domestic consumption.

The current situation index fell to 53.1 in March from 55.5 in January, according to the Reserve Bank of India’s consumer confidence survey, where 100 is the dividing line between pessimism and optimism. Survey respondents were also less optimistic about the year ahead, with the future expectations index dipping to 108.8 from 117.1 in the period under review, the RBI said.

The reasons for the pessimism were deteriorating sentiments on general economic situation, income and prices, the RBI said. The current situation index had hit a record low of 49.9 in September.

Also, the survey pointed to well-entrenched inflation expectations, which is an added challenge for monetary policy makers who were forced to pause interest rate cuts last year because of gains in price-growth. Sticky underlying price pressures since then have kept the rate-setters from resuming the easing, including at their latest meeting that concluded Wednesday.

Households’ median inflation perception for the current period as well as for the three-months ahead increased by 50 basis points to 8.7% and by 80 bps to 10.1%, respectively, compared to the January 2021 survey, the RBI said. Median inflation expectations for one-year ahead also remained at an elevated level.

“Elevated inflation and negative real rates can create their own distortions such as encouraging investment in physical assets such as gold, which in turn can pressure external balances through high gold imports and lower potential growth via lower financial savings,” she added.