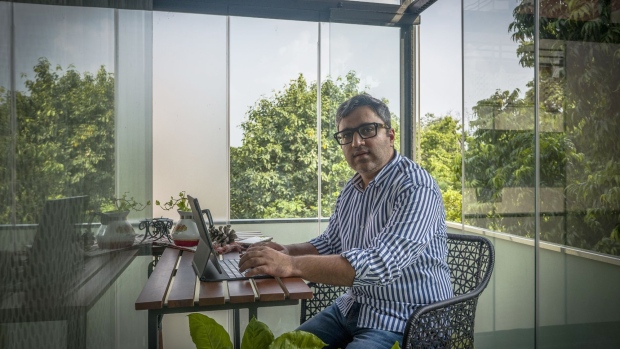 Ashneer Grover, co-founder and managing director of BharatPe, at his home in New Delhi, India, on Tuesday, Oct. 5, 2021. As online payments and digital loans in the second-most populous country soar at some of the fastest rates worldwide, money is pouring into India’s financial technology sector at an unprecedented pace. , Bloomberg

(Bloomberg) -- BharatPe, one of India’s leading fintech firms, began legal proceedings against its co-founder and his wife for allegedly embezzling and misusing company money, in what could mark the first case of its kind in the nation’s thriving startup ecosystem.

The company sued Ashneer Grover and his wife, Madhuri Jain, for damages worth about 880 million rupees ($10.7 million), according to a civil lawsuit filed Wednesday in the Delhi High Court, a copy of which Bloomberg News reviewed. BharatPe has also moved the court to restrain Grover from making derogatory public statements about the company.

Grover and Jain face 17 additional criminal charges in a separate complaint filed by BharatPe with the economic offenses wing of the Delhi police. Grover faces a 10-year prison sentence if convicted.

Apart from Grover and Jain, the complaint names Jain’s father, brother and brother-in-law, according to a copy seen by Bloomberg. They’re accused of making “illegitimate” payments of 760 million rupees to fake HR consultants, as well as making inflated payments worth 62.3 million rupees.

The complaint flags potential embezzlement of 717.6 million rupees and “dishonest and illegal payments” to travel agencies. Jain is specifically accused of enriching herself through reimbursement of forged invoices and destruction of evidence.

Tensions between Grover and other leaders at BharatPe, which is backed by global investors including Sequoia Capital and Tiger Global Management, reached a climax in March, when the 39-year-old entrepreneur was forced to resign. The company’s C-suite accused Grover of using funds to bankroll a lavish lifestyle, allegations he has vehemently denied.

Ashneer Grover, Madhuri Jain and their family members  didn’t respond to emailed questions and text messages seeking comment on the cases against them. The Delhi High Court has given Ashneer Grover’s legal team two weeks to reply.

The public showdown between BharatPe and Grover has cast a cloud over India’s dynamic startup economy, where venture money has helped fuel the rise of an ambitious new class of millionaires eager to displace the old guard.

Grover, who co-founded BharatPe in 2018, helped transform the company into a unicorn, going toe-to-toe with older rivals such as Paytm and the Walmart Inc.-owned PhonePe. The tech company found enormous success offering digital payment services across India.

He was also the driver of growth and a master marketer, making public appearances in snazzy jackets and landing zingers on fresh-faced entrepreneurs as a “shark” investor on the first Indian edition of Shark Tank. Grover doesn’t have a place in the line-up for the upcoming second season.

--With assistance from Sankalp Phartiyal and Shruti Mahajan.

(Updates with details about complaint through out)