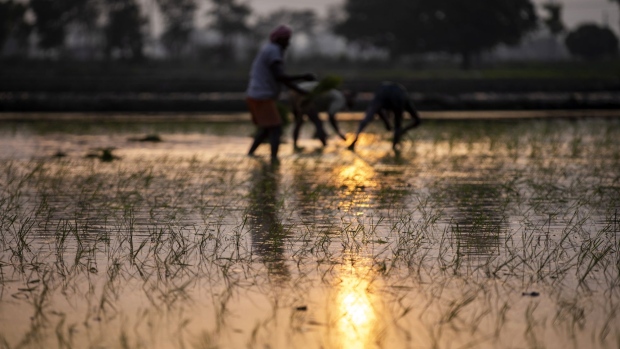 Farmhands sow rice saplings at a flooded paddy field in Karnal district, Haryana, India on Friday, June 26, 2020. From March through May, around 10 million migrant workers fled India’s megacities, afraid to be unemployed, hungry and far from family during the world’s biggest anti-Covid lockdown. Migrant workers aren’t expected to return to the cities as long as the virus is spreading and work is uncertain. , Bloomberg

The legislation seeks to remove restrictions on marketing farm products and allow cultivators to deal directly with private companies to sell their crops.

“These laws will bring an unprecedented change to the lives of the farmers,” Agriculture Minister Narendra Singh Tomar said in Parliament. Farmers would still receive full protection and procurement of their produce at guaranteed prices, he said.

The government has said the move would boost output and income for producers, but opposition groups and a key coalition ally of Prime Minister Narendra Modi’s party say it will lead to exploitation of farmers by private companies.

The ruling Bharatiya Janata Party’s long-time supporter, Shiromani Akali Dal, which rarely goes against the decision of Modi’s coalition, said farmers fear the changes are the first step toward removing the government’s guaranteed procurement at minimum prices, forcing them to make distress sales to private companies.

The changes to agriculture laws were proposed as part of Modi’s plan to make India self-reliant after the effects of the pandemic ravaged the South Asian country’s economy.