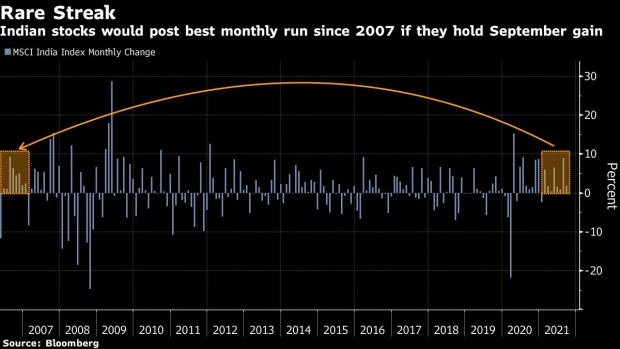 A bronze bull statue stands at the entrance to the Bombay Stock Exchange (BSE) building in Mumbai, India, on Wednesday, May 26, 2021. Money managers are counting on a consumption-led economic rebound from the world's worst coronavirus outbreak and the nation's long-term growth prospects to support corporate earnings and equity valuations. , Bloomberg

(Bloomberg) -- Indian stocks are throwing up rare signals pointing to the possibility of further gains after a powerful rally.

The MSCI India index beat the MSCI World gauge of developed nations by more than six percentage points last month, the biggest gap since 2018. The average return from the India gauge 12 months out after such relative outperformance is 15%, according to data compiled by Bloomberg.

The Indian index is also eyeing its eighth straight monthly advance. Such a streak has only been seen twice before in the past two decades, in 2003 and 2007. The average return a year after these observations was just over 19%.

“While we expect the good run for the indexes to continue, the market may remain narrow as investors are now betting on proven stocks and don’t mind overpaying for them,” said Deepak Jasani, head of retail research at HDFC Securities Ltd.

A tide of foreign inflows and domestic liquidity has helped fuel a 132% surge in Indian stocks from their March 2020 pandemic lows. That’s naturally led to caution about stretched valuations and a prospective reduction in Federal Reserve stimulus that could suck money out of emerging markets. At the same time, the momentum of the Indian rally remains a draw for optimists.

While the high valuation of Indian stocks is a risk, superior and less volatile corporate earnings growth suggests the bourse’s premium relative to other emerging nations will remain in place, according BCA Research Inc.’s Senior EM Strategist Rajeeb Pramanik.