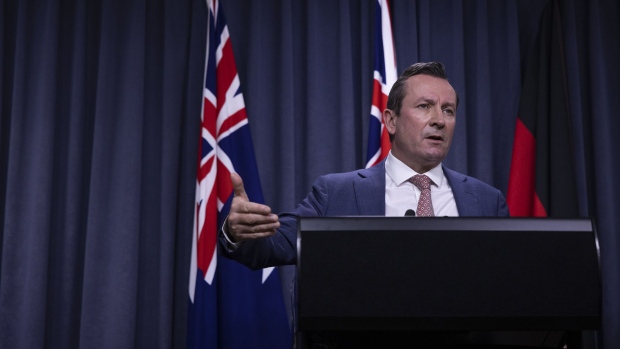 PERTH, AUSTRALIA - JUNE 29: West Australian Premier Mark McGowan speaks to media at Dumas House on June 29, 2021 in Perth, Australia. Lockdown restrictions have come into effect across the Perth and Peel regions for the next four days, following the confirmation of new community COVID-19 cases linked to the highly contagious Delta variant of the coronavirus. From midnight, residents in the Perth and Peel regions are only permitted to leave their homes for essential reasons, including purchasing essential goods, receiving medical care, or caring for the vulnerable. People may leave home to get vaccinated or to exercise within a 5-kilometre radius of their home. Weddings are restricted to five people, funerals to 10 people while gyms, beauty and hair salons, casinos and nightclubs must close. (Photo by Matt Jelonek/Getty Images) , Photographer: Matt Jelonek/Getty Images AsiaPac

(Bloomberg) -- White supremacist groups including some in the U.S. are spreading vaccine misinformation online among Indigenous communities in remote parts of Western Australia in order to create fear of inoculation and cause harm, state premier Mark McGowan said.

“The suspicion is these white supremacist groups out of America wouldn’t be unhappy if bad outcomes occurred to the health of Aboriginal people in Australia,” McGowan told reporters Thursday, the Australian Broadcasting Corp. reported.

Western Australia -- one of the world’s last Covid-zero policy holdouts -- will keep its borders closed until the state hits a vaccination rate of 90% for people aged 12 and over, a milestone it’s expected to hit in late January or early February. McGowan said even then remote areas of the sprawling state could remain closed to visitors when the hard border is dropped, given low vaccination rates in some communities, the ABC reported.

The government last month launched a five-week vaccination blitz for First Nations people, with vaccination rates in the state’s Indigenous communities at less than 50% as of Nov. 19. Statewide, the vaccination rate is now 76.6%.

“Some of these groups, like white supremacist groups, are doing it because they want to harm Aboriginal people,” Mr McGowan said. “I just urge Aboriginal people to listen to the experts, who say the vaccine is safe and effective and it will save their lives.”