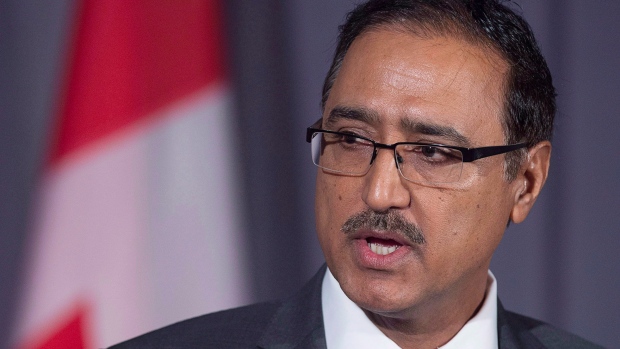 CALGARY - Natural Resources Minister Amarjeet Sohi says consultations with Indigenous groups about the stalled Trans Mountain pipeline expansion are progressing well and he still expects to wrap up the court-ordered process by May.

On a conference call from Houston, where he's attending the CERAWeek energy conference, Sohi told reporters his department has now met with more than 100 of the 117 Indigenous communities expected to be impacted by the project.

The Federal Appeal Court last summer overturned approval of the project to triple oil shipments from Edmonton to the West Coast, ruling that the NEB had not properly considered its impact on marine life nor had Ottawa meaningfully consulted with Indigenous groups.

Last month, the National Energy Board found that the pipeline is still in the public interest despite the risk that an increase in tanker traffic could adversely affect southern resident killer whales, hurt related Indigenous culture and increase greenhouse gas emissions.

It added 16 new recommendations for federal government action in addition to the 156 conditions in its initial approval in 2016.

Sohi says the recommendations, which the NEB said are not within its power to order, are already being studied by his department and will be considered in the government's decision on TMX when consultations are complete.