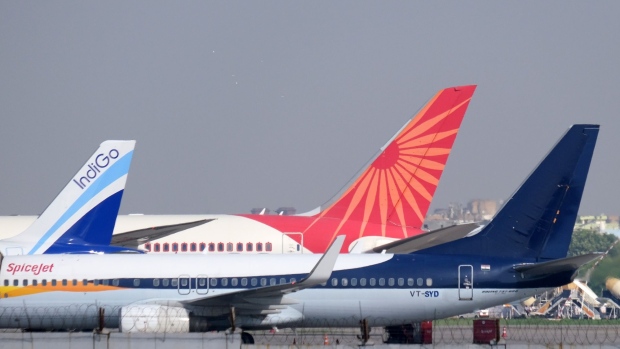 Aircraft operated by SpiceJet Ltd., from front, IndiGo, a unit of InterGlobe Aviation Ltd., and Air India Ltd. on the tarmac at the Indira Gandhi International Airport in New Delhi, India, on Tuesday, Sept. 28 2021. The India government is attempting to sell state-run Air India after two failed attempts. Despite the mounting debt and losses, the airline has some lucrative assets, including valued slots at London's Heathrow airport, a fleet of more than 100 planes and thousands of trained pilots and crew. Photographer: T. Narayan/Bloomberg , Bloomberg

(Bloomberg) -- India is investigating why more than 50% of flights by IndiGo, Asia’s biggest budget airline by market value, were delayed on Saturday, the head of the nation’s Directorate General of Civil Aviation said.

Many employees reported sick so that they could attend interviews at Air India Ltd., which is on a hiring spree under new owners Tata Group, local media reported. The delays come as airlines and airports globally struggle to keep up with a sudden surge in demand as pandemic restrictions are lifted.

A representative for IndiGo didn’t immediately respond to a request for comment.

Formerly state-run Air India, once known for its premium service and advertisements featuring Bollywood stars, is trying to rejuvenate itself under new owners. It’s preparing to order as many as 300 narrowbody jets, on top of a deal for larger trans-continental aircraft. Last week, the carrier warned that it could drop a former sister company as its preferred ground-handling provider as poor service impacts operations at some airports.

IndiGo, which has risen from an ambitious venture of a little-known travel firm to control more than half of the world’s fastest-growing aviation market, prides itself on punctuality, with a popular tagline saying “On time is a wonderful thing.” While the airline offers no frills flights, it has been able to win customer with cheap, on-time services, with the help of an efficient staff that’s ensured planes don’t stay on the ground for long.