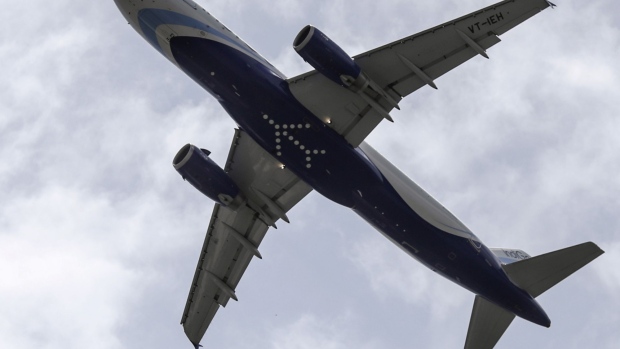 An aircraft operated by IndiGo, a unit of InterGlobe Aviation Ltd., prepares to land at Chhatrapati Shivaji International Airport in Mumbai, India, on Monday, July 10, 2017. IndiGo, the only carrier that has made a pitch to purchase Air India Ltd., sought to allay investor concerns about the budget operator buying the unprofitable national carrier, saying a deal would help speed up its plans for low-cost, long-distance flights. , Photographer: Dhiraj Singh/Bloomberg

(Bloomberg) -- IndiGo, India’s biggest airline, slipped back into a loss in its latest quarter as the omicron-led virus wave in the country curbed air travel. Fuel-related expenses also rose sharply.

The carrier, operated by InterGlobe Aviation Ltd., posted a loss of 16.8 billion rupees ($216.7 million) in the three months through March, according to an exchange filing Wednesday. The average estimate from analysts tracked by Bloomberg was for a loss of 8.3 billion rupees. It also marks a setback for the airline that reported a surprise profit of 1.3 billion rupees in the preceding quarter.

Revenue rose 29% from the same quarter last year to 80.2 billion rupees, while total costs jumped 32% from a year earlier to 98.9 billion rupees. Fuel costs surged 69% in the latest quarter, the filing said.

The emergence of the highly-transmissible omicron Covid-19 variant in India upended a nascent recovery that the aviation sector was witnessing in the second half of 2021 following a deadly delta-led outbreak in April and May last year. Credit rating firm ICRA Ltd. estimates that India’s airlines lost $3.4 billion in the year through March.

“This quarter has been difficult because of the demand destruction caused by the omicron virus in the first half,” Chief Executive Officer Ronojoy Dutta said in a statement Wednesday. “Although traffic rebounded and demand was robust during the latter half of the quarter, we were challenged by high fuel costs and a weakening rupee.”

As IndiGo works toward returning the airline to profitability, it will focus on maintaining its cost leadership position and building the most efficient network in the region, Dutta said. IndiGo expects the capacity to increase by as much as 60% in the year ended March 2023 and by 150% in the ongoing June quarter compared to a year earlier.

Domestic air traffic in January-March climbed 6% to 24.8 million passengers from a year earlier, and authorities expect traffic to surpass pre-pandemic levels of 415,000 daily passengers within a year. With international flights resuming, airlines are also adding back capacity and enhancing services.

Several top-level executives have left the airline since billionaire co-founder Rahul Bhatia was appointed to a newly-created executive role of managing director in February. Fellow co-founder Rakesh Gangwal resigned from the airline’s board, as part of an agreement between the two.

Dutta’s resignation was expected as he and Bhatia had a difference of opinion in how to grow the airline, Mark Martin, founder of Dubai-based Martin Consulting LLC said earlier in May. Bhatia will be taking point on IndiGo’s strategy and direction as he is well-versed in the Indian aviation market, while the new chief executive’s job will be more about managing the carrier, Martin said.