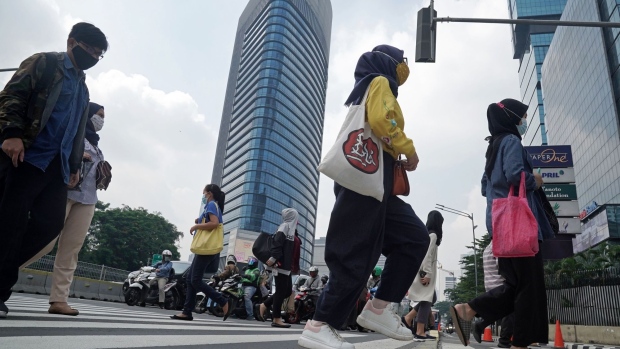 Commuters cross a road in Jakarta, Indonesia, on Tuesday, March 16, 2021. Indonesia is pursuing another attempt at increasing government influence in the decision-making and operations of its central bank, as well as expanding its ability to fund public debt, according to a draft legislation to be discussed in parliament. Photographer: Dimas Ardian/Bloomberg , Bloomberg

(Bloomberg) -- Indonesia is shifting away from its goal of reaching herd immunity for Covid-19 as the rise of the more infectious delta variant pushes the threshold beyond reach.

Currently available vaccines are less effective at stopping transmission of the delta variant, making it possible for the virus to continue circulating even if everyone in the country gets immunized, according to data under review by the government. Indonesia, which has become the epicenter of the global pandemic, plans to redouble its efforts to control Covid-19 on the ground rather than relying on vaccinations alone to bring it to heel, said Jodi Mahardi, spokesman to the minister overseeing the pandemic response.

It’s a challenge the entire world is now confronting. A report from the Infectious Diseases Society of America estimated that the U.S. would need to vaccinate nearly 90% of its population in order to reach herd immunity, a broad level of protection that emerges when so many people have immunity that the virus can no longer take hold and circulate.

Even then, there’s no proof yet that the approach will work, given the risk of breakthrough infections, new variants or other factors with the virus that’s been around for less than two years.

The level is even greater for Indonesia, the world’s fourth-most populous nation. It is relying mainly on less effective Chinese-made Sinovac Biotech Ltd. shots, compared to the more potent mRNA vaccines from Pfizer Inc., BioNTech SE and Moderna Inc. that dominated in the U.S.

The numbers look stark on paper. Indonesia’s modeling assumes delta’s reproduction rate is 6.5, meaning every 10 infected people would spread it to 65 others. To reach herd immunity, the country would need to immunize 154% of its population if using Sinovac’s shots, or 128% if using Pfizer’s - an impossibility.

Southeast Asia’s largest economy has been topping the world’s tally of daily Covid-19 deaths as the delta variant spreads through the country and overwhelms its hospitals. The government said as recently as July that it is trying to reach herd immunity by fully inoculating 70% of the population by November.

It’s now seeking to control the pandemic with a combination of vaccines, mask mandates and restrictions on movement. Its target is to push the virus’s reproduction rate down to 0.9 by October, low enough to reduce the overall number of infections. It still has a target of administering 2.5 million vaccines per day in August. Just 8% of Indonesians are fully inoculated.

Indonesia isn’t alone, as other countries raise concern that the road to herd immunity may be longer or less likely than previously anticipated. Officials in neighboring Singapore said they’re aiming for low levels of infection, an endemic state that’s similar to what is seen every year with influenza, instead of herd immunity.