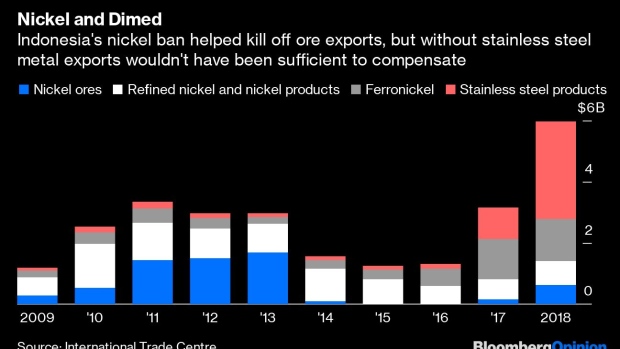 (Bloomberg Opinion) -- If the definition of insanity is doing the same thing over and over and expecting a different result, what is Indonesia playing at?

The country announced Monday an immediate halt to exports of nickel ore, sending prices gyrating as traders tried to gauge the impact of a measure that was originally slated for 2022. We’ve been here before: From 2014 to 2016, Indonesia stopped nickel ore exports in an attempt to spur the creation of a homegrown metal-processing industry.

How did that episode go?

Not so well. The year before the 2014 ban, Indonesia exported a combined $2.86 billion in nickel ores, refined nickel and ferronickel, a semi-processed product. That total fell by more than half in the three years after the regulation was fully in force. Once the policy was partially unwound and more ores were allowed through last year, exports of the three products amounted to only $2.78 billion. Indeed, the main beneficiary of the policy has been the Philippines, whose exports of both nickel ores and refined nickel soared as soon as the ban took effect.

The purpose of all this was to push Indonesia up the value chain by forcing foreign companies to invest in onshore smelting and processing facilities. Nickel processing is a notoriously low-margin business in the best of times — one reason you’d want to think twice before taking great efforts to encourage it. Nevertheless the spending has materialized: Some 11 smelters have been built and 25 are under construction, according to government figures quoted by DBS Group Holdings Ltd. analyst Lee Eun Young.

Still, look beyond the smelting sector and it's clear the uncertainty has done just as much to put off investors. Foreign direct investment inflows of $3.92 billion in 2016 were the lowest since 2004, according to data from the UN Conference on Trade and Development. Even the more generous figures quoted by the Indonesian government’s investment agency suggest that foreign flows broke a rising trend in 2013, and have remained capped around the $30 billion-a-year level ever since. The total stock of investments, which had briefly crept ahead of the total in India in 2013, has flat-lined for five years.

That's not a promising result. After all, Indonesia doesn't want a downstream metals-processing industry for its own sake: It wants an engine of economic development. If investment is scared off, that development won’t happen. The chaotic handling of the export ban — first introduced by former President Susilo Bambang Yudhoyono in the run-up to the 2014 election, then upheld by his successor Joko Widodo, then partially unwound for what should have been a five-year period from 2017, and now re-introduced two years early — has been a potent demonstration to foreign investors that this country isn’t a great place to risk putting their capital.

There’s one area where the policy has been a success. While exports of ore and refined or semi-refined metal have never recovered their levels before the ban, the stainless steel that accounts for more than two-thirds of global nickel consumption has done considerably better. A vast plant established on Sulawesi island by China’s Tsingshan Holding Group Co. has the lowest costs in the world, according to Wood Mackenzie. The site has sent product flooding into India, Taiwan, Europe and other parts of the world, and more than made up for the weakness elsewhere in Indonesia’s nickel export supply chain.

The problem is that Indonesia isn’t the only country that can play industrial policy. Whenever a major new player like Tsingshan emerges in a commodity sector, you can expect its rivals elsewhere in the world to start complaining to their governments about unfair trade. Sure enough, China imposed anti-dumping duties ranging as high as 103.1% on imported stainless products in July, and the European Union is investigating imports from Indonesia, too. (Perhaps surprisingly, it's the U.S. that has refused to join the protectionism party so far).

The lesson from Australia — the world's largest supplier of steel materials, and home to just a single blast furnace — is that relatively remote commodity exporters are better off just digging up rocks and sending them overseas to be processed in countries closer to major manufacturing bases.

Jakarta’s current policy better resembles that of Latin American economies in the years after World War II: raising tariff barriers to build up a domestic manufacturing sector that ultimately won’t be able to stand on its own two feet. Anyone watching the current turmoil in Chile and Argentina ought to question whether that’s the wisest path to follow.