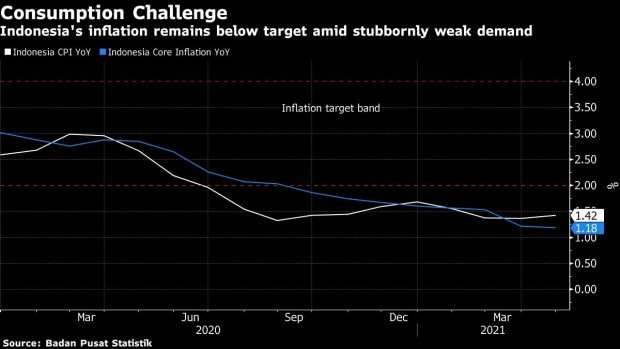 Workers load cantaloupes into a truck at Pasar Induk Kramat Jati wholesale market in Jakarta, Indonesia on Sunday, May 2, 2021. Indonesia could face a challenging road back to fiscal discipline as the government expects to keep spending heavily to support the economy next year. Photographer: Dimas Ardian/Bloomberg , Bloomberg

(Bloomberg) -- Indonesia’s economy contracted more than expected in the first quarter, as one of the fastest vaccine rollouts in Southeast Asia hasn’t been enough to revive domestic demand.

Gross domestic product declined 0.74% in the first quarter from a year ago, the statistics bureau said Wednesday, worse than the median estimate of -0.65% in a Bloomberg survey of economists. Still, it represented an improvement from the 2.19% contraction in the final quarter of 2020.

GDP shrank 0.96% in the first three months of the year compared to the previous quarter, worse than the 0.85% contraction economists expected.

The country’s benchmark stock index pared the day’s gains to 0.2% after the announcement. The rupiah was little changed at 14,428 to the dollar.

“The virus resurgence at the start of the year is likely to have put a dent on consumption, even though there have been some signs of nascent recovery more recently,” said Wellian Wiranto, an economist at Oversea-Chinese Banking Corp in Singapore. “Bank Indonesia is most likely going to continue to keep its policy rate unchanged, focusing on pushing for more forthright transmission of its previous rounds of rate cuts by the banking system.”

The government recently maintained its outlook for 4.5%-5.3% GDP growth for 2021, expecting consumption around Eid celebrations in April-May to boost growth in the second quarter. On Tuesday it cut its forecast for 2022, now expecting growth of 5.2%-5.8% next year, down from an earlier projection of 5.4%-6.0%.

Solid performance in trade and investment have been the main growth drivers early this year. Exports and imports bested estimates, while foreign direct investment climbed to a three-year high, mostly in provinces outside the main growth engine of Java.

“The process of economic recovery will differ between provinces and sectors,” Suhariyanto said. “Sectors that are highly dependent on public mobility, such as transportation and accommodation, will take longer to be able to pick up.”

While factory activity and consumer confidence have shown a steady increase, core inflation and retail sales remain subdued as movement curbs limits household spending, which accounts for almost 60% of the economy.

Other details from Wednesday’s data:

As many as 12.7 million Indonesians have been inoculated in the government vaccination drive as of early May, though that’s still a small percentage of the country’s population of about 270 million. Private companies will begin inoculating workers soon, once the government sets a selling price on vaccines.

“The high frequency mobility data we track from Google suggest that government restrictions and social distancing remain a major drag on activity,” Gareth Leather, senior Asia economist at Capital Economics Ltd., wrote in a research note. “Against such a weak backdrop, the government will look to support the economy through loose fiscal policy.”