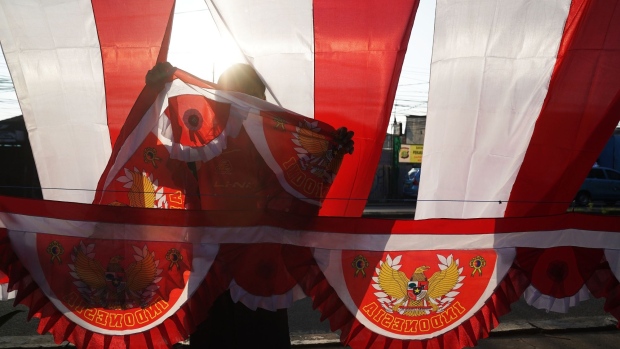 A vendor arranges flags and banners for Independence Day in Jakarta, Indonesia, on Wednesday, Aug. 4, 2021. Southeast Asia’s largest economy has been topping the world’s tally of daily Covid-19 deaths as the delta variant spreads through the country and overwhelms its hospitals. Photographer: Dimas Ardian/Bloomberg , Bloomberg

As many as 10,000 people are expected to attend the opening ceremony of Indonesia’s first major sports event since its worst outbreak -- a test of its strategy of living with the virus.

The national sporting week called PON will start Saturday at the newly renovated stadium in the eastern city of Jayapura, with the maximum capacity set at 25%, according to a domestic affairs ministry decree. Spectators must be tested before attending, wear masks and maintain social distancing.

Normal activities are starting to return in Southeast Asia’s biggest economy as its Covid-19 cases and deaths are brought under control. That’s a stark contrast to weeks ago, when the country was reporting the world’s highest number of coronavirus deaths each day.

Now, the government is seeking to rely on a combination of testing, health protocols and vaccination to find a way to ease mobility curbs without seeing a resurgence in cases.

Large-scale public events like PON will put that plan to the test at a time when vaccination coverage is still low. Less than 20% of Indonesians are fully inoculated. In Papua province, where the sporting event is being held, just 11% of people have gotten both shots.

The government is boosting efforts to speed up vaccination as it expects an “inevitable” resurgence in cases caused by new variants before the end of the year. For now, the numbers are heartening. The nation added 87 deaths on Friday, down from a record of over 2,000 a day in late July, when the highly infectious delta variant ravaged across the nation of 270 million people and crippled its healthcare system.