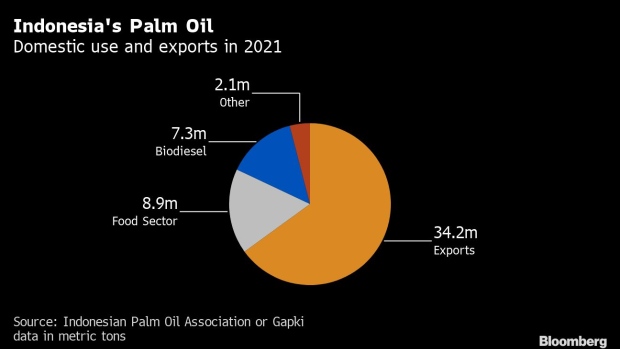 Workers load harvested palm oil fruit bunches into a truck on the side of a road in East Kalimantan, Borneo, Indonesia, on Wednesday, Nov. 27, 2019. For Jakarta, a city on the island of Java saddled with some of the worst superlatives in the region⁠—most polluted, most congested, fastest sinking⁠—the floods were an old story, the third time deluges have killed dozens since 2007. The problems have become so overwhelming that, even before the latest catastrophe, President Joko Widodo had decided to build a new capital 1,200 kilometers away on the island of Borneo. , Bloomberg

(Bloomberg) -- Indonesia, the world’s biggest shipper of edible oils, lifted a ban on palm oil exports in a move that will bring relief to the global market after the war in Ukraine choked off critical supplies.

Exports of crude palm oil and other refined products including palm olein and used cooking oil can resume from May 23, President Joko Widodo said in an online briefing on Thursday.

Indonesia’s ban, which was imposed since April 28, was one of the biggest acts of crop protectionism since Russia’s invasion of Ukraine, which stymied exports of sunflower oil and worsened a global shortage. Palm oil is used in everything from food to soap to fuel, and the move by Indonesia threatened to push up costs even more across multiple supply chains at a time of rampant inflation.

The government has struggled to control prices and secure local supplies since December, with a raft of measures ranging from price caps, to export curbs and cash handouts for households and hawkers. But all that failed to pull down prices to the government target of 14,000 rupiah (97 U.S. cents) per liter of bulk oil. The surging costs helped push inflation to a three-year high in April.

Indonesia’s ban was widely anticipated to be short-lived. Gro Intelligence, an agricultural analysis firm, said that the government could be forced to relax the move by the fourth week of May to keep storage tanks from overflowing. An industry group also forecast that the policy would end this month.