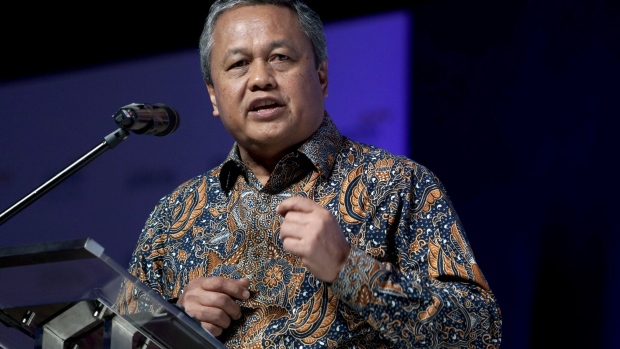 Perry Warjiyo, governor of Bank Indonesia, speaks during the Mandiri Investment Forum in Jakarta, Indonesia, on Wednesday, Jan. 30, 2019. Indonesia needs to curb imports to rein in a widening trade deficit even though it poses no threat of imported inflation, according to Warjiyo. , Bloomberg

(Bloomberg) -- Indonesia’s central bank is on track to issue its own digital currency for banks to use, while considering ways to ensure it would be exchangeable across borders.

Bank Indonesia will release the conceptual design of digital rupiah by the end of this year, Governor Perry Warjiyo said in a briefing on Thursday. “The principle of digital rupiah will be the same as paper money which is to be the only legal currency for digital transactions in Indonesia,” he said.

The central bank has been studying the digital rupiah since last year to get ahead of the global adoption of cryptocurrency as a payment method. Other monetary authorities are looking into blockchain technology to improve transfers and settlements, with the central banks of the Philippines and Australia also considering such wholesale digital currencies.

Bank Indonesia is currently working on the cybersecurity features of the digital rupiah, while working with counterparts in other countries to explore technology options. The central bank will distribute the digital currency to large banks and payment service companies to sell to smaller banks for various retail transactions.

“This is to avoid the classic issue of disintermediation of banks, whereby households would prefer to bank directly with the “risk-free” central bank than banks on the street, especially during crisis period,” said Wellian Wiranto, economist at Oversea-Chinese Banking Corp in Singapore.