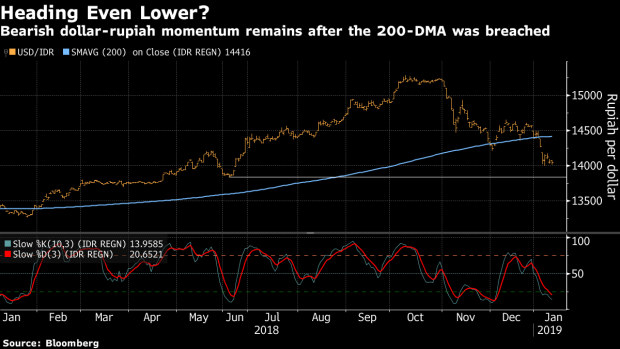 (Bloomberg) -- The return of yield-hungry investors is signaling the worst may be over for Indonesia.

Global funds are piling back into Asia’s bellwether for emerging markets, buying $795 million of debt so far this year and sending yields down about 90 basis points from their October peak as the Federal Reserve looks to take a more cautious approach to policy tightening. That’s spelling relief for the rupiah and Bank Indonesia, which spent most of 2018 seeking to stem an exodus of foreign capital amid a rout in developing-nation assets.

After plunging almost 9 percent over the first nine months of last year, the currency roared back in the fourth quarter as Indonesia raised interest rates to 6 percent, intervened in the foreign-exchange and bond markets and curbed imports to help rein in the trade gap. The rebound has shown no signs of fading in 2019. The rupiah is already up 2.4 percent -- tops in the region -- and central bankers have signaled a willingness to let the currency strengthen further, according to PT Bahana Sekuritas.

“At the moment, BI appears more inclined to push for rupiah appreciation to lure foreign inflows, rather than to keep the rupiah undervalued to curb imports and boost exports,” Satria Sambijantoro, an economist at the Jakarta-based broker, wrote in a Jan. 9 note to clients. “The one-way strengthening of the rupiah should make Indonesian assets very appealing among foreign investors.”

Even if Bank Indonesia leaves its benchmark rate unchanged at its Jan. 17 policy meeting, money managers are once again being drawn to what remain some of the highest yields in Asia. With 10-year securities paying about 7.98 percent and inflation hovering just above 3 percent, the country offers an enticing real rate, particularly amid a reassessment of developed-market tightening.

Not only has BI signaled continued support for the rupiah, but it’s also trying to tackle the currency’s Achilles heel -- the nation’s deteriorating current-account deficit.

At its last meeting on Dec. 20, the central bank highlighted that “the policy rate is still consistent with efforts to reduce the current-account deficit to a safe level and maintain the attractiveness of domestic financial assets."

These factors have helped buoy the currency. Dollar-rupiah breached its 200-day moving average on Jan. 4 before bouncing off support around 14,000 per dollar last week. Still, the pair appears to be headed lower near-term given momentum indicators -- such as slow stochastics and moving-average convergence-divergence -- remain in bearish territory.

If Bank Indonesia continues to focus on currency stability at its upcoming meeting, a test of support at the June 6 low of 13,837 per dollar looks to be on the horizon.

Below are key Asian economic data and events due:

To contact the reporter on this story: David Finnerty in Singapore at dfinnerty4@bloomberg.net

To contact the editors responsible for this story: Tan Hwee Ann at hatan@bloomberg.net, Boris Korby