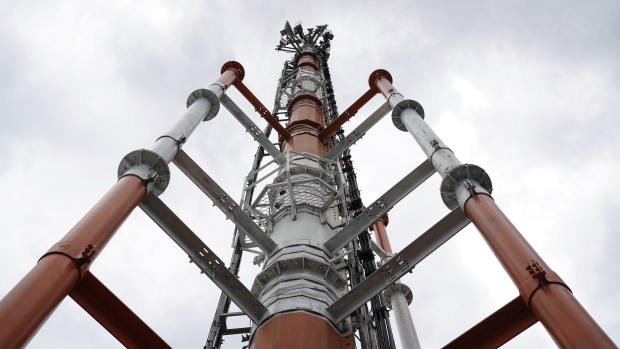 A PT Dayamitra Telekomunikasi telecommunications tower in Jakarta, Indonesia, on Sunday, Nov. 21, 2021. The infrastructure services unit of state-owned PT Telkom Indonesia raised about $1.3 billion in a Jakarta initial public offering, according to people familiar with the matter, making 2021 the country’s biggest IPO year in more than a decade. , Bloomberg

(Bloomberg) -- PT Telkom Indonesia is planning to combine its broadband and wireless businesses as part of an overhaul of the sprawling state-owned telecommunications company, a senior executive said on Thursday.

The mobile business, known as Telkomsel and owned 35% by Singtel, counted 176 million subscribers in 2021, making it the largest cell provider in Indonesia, according to its latest annual report. The fixed broadband service had 8.6 million subscribers through its IndiHome brand and held a market share of around 80%.

The Jakarta-based group is speaking with financial advisers about the deal, which could value the combined businesses at several billion dollars, people familiar with the matter said earlier. Telkom hopes to eventually separate its consumer-facing business from one focused more on corporate customers, the people said, asking not to be identified as the matter was private.

Telkom President Director Ririek Adriansyah confirmed via text message in response to a Bloomberg News query that the company was in the process of merging its fixed broadband and wireless businesses but did not provide further details.

The business reorganization comes as Indonesia is poised for growth in areas such as e-commerce and financial technology. The country’s overall digital economy is set to double to $146 billion in 2025, according to a report last year by Alphabet Inc.’s Google, Temasek Holdings Pte and Bain & Co.

Telkom shares have climbed about 9% this year, valuing the company at around $29.6 billion. They rose 3.1% on Thursday, their largest increase in more than two weeks, on expectations that the company will benefit from measures in Indonesia’s annual budget supporting 30 million small businesses using digital systems by 2024.

The group counts a wide range of assets from mobile and broadband to satellite, towers and digital content. Last year, Telkom’s infrastructure services unit, known as Mitratel, raised about $1.3 billion in a Jakarta initial public offering.