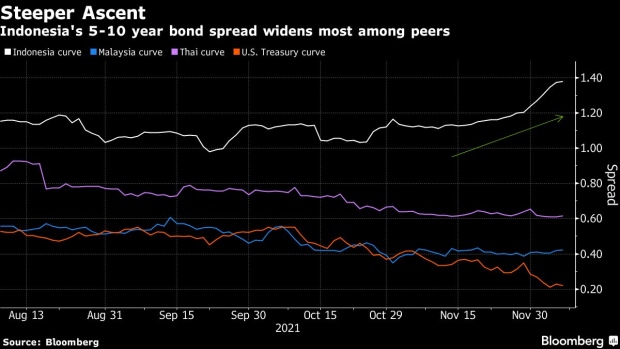 (Bloomberg) -- The prospect of an earlier policy tightening by the Federal Reserve is accelerating a selloff in Indonesia’s long-dated bonds.

The spread between the 5- and 10-year sovereign bonds widened to a 14-month high this week. Outflows from its bond markets have already touched $4 billion so far this quarter, on course for the most since the first three months of 2020.

“The deterioration in global risk sentiment since the last week of November has driven the bear steepening in the Indonesian yield curve, led by a weaker rupiah and accompanied by portfolio outflows, according to Jennifer Kusuma, senior Asia rates strategist at Australia & New Zealand Banking Group Ltd. in Singapore. “Sentiment is to remain fragile heading into the year-end, as trading activity would typically fall in the period,” she said.

The outflows are a sign that emerging-market investors are already positioning for the Federal Reserve to start hiking next year, which would narrow the rate differential between Treasuries and rupiah debt. While most analysts expect milder capital outflows than during the 2013 taper tantrum, a steeper yield curve could still raise the borrowing costs for Indonesia.

The yield on Indonesia’s 10-year bond rose to 6.3% this week, the highest since August. That takes the spread with 5-year bonds, which are anchored by Bank Indonesia’s easy policy stance, to 136 basis points.

However, despite the selloff, valuations in long-tenor rupiah bonds are yet to turn attractive. The spread between the 10-year Indonesian bond and similar-dated Treasuries is close to 480 basis points, which is 0.4 standard deviations below the five-year mean. In comparison, the same gauge for Thai and Malaysia bonds is at least 1.2 standard deviations above the five-year average, signaling wider premiums.

Foreign holdings of Indonesia’s sovereign bonds are among the highest in the region at about 20%. That’s down from 25% in the beginning of the year amid investor concern on the central bank’s debt monetization.