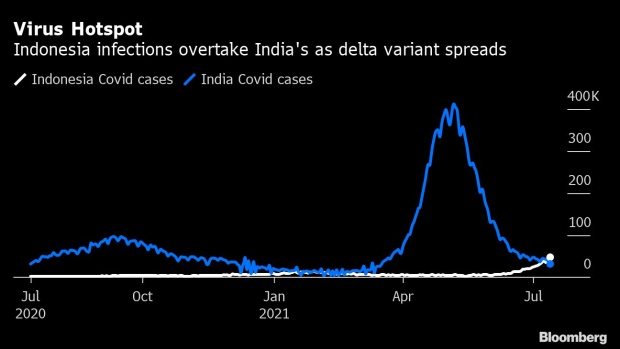 JAKARTA, INDONESIA - JULY 12: Members of a squad of public safety officers, specializing in preparing those suspected of dying of Covid-19 for burial, carry the casket of a man suspected to have died of Covid-19 to a waiting ambulance on July 12, 2021 in Jakarta, Indonesia. A special team composed of volunteers from Jakarta's metropolitan police, public order police, fire department and other public safety organizations has been helping families prepare their deceased loved ones for burial at their homes under covid-19 burial safety protocols when the deceased is suspected of having died from the Covid-19 coronavirus. Since the beginning of the pandemic the team has prepared over 600 bodies for burial, nearly 200 of them in just the past few weeks as people are forced to recover at home with hospitals overwhelmed by the rapid spike in Covid-19 patients. Jakarta's government is planning an expansion of the team and has added a unit to help with the distribution of oxygen for hospitals running short. (Photo by Ed Wray/Getty Images) , Photographer: Ed Wray/Getty Images AsiaPac

The country has seen its daily case count cross 40,000 for two straight days -- including a record high of 47,899 on Tuesday -- up from less than 10,000 a month ago. Officials are concerned that the more transmissible new variant is now spreading outside of the country’s main island, Java, and could exhaust hospital workers and supplies of oxygen and medication.

Indonesia’s current numbers are still far from India’s peak of 400,000 daily cases in May. India, with a population roughly five times the size of Indonesia’s 270 million people, saw daily infections drop below 33,000 on Tuesday as its devastating outbreak wanes.

Indonesia reported 907 deaths daily on average in the past seven days -- compared to just 181 a month ago -- while India reported an average of 1,072 daily fatalities.

Developing countries are struggling to contain the virus -- especially delta’s rapid spread -- even as vaccine rollouts are allowing life to return to normal in countries like the U.S. and U.K.

The outbreak in Indonesia underscores the consequences of an unequal global distribution of vaccines that has seen richer countries gobble up more of the supply, leaving poorer places exposed to outbreaks of variants like delta. World Health Organization director-general Tedros Adhanom Ghebreyesus has called the growing divide a “catastrophic moral failure.”

Indonesia has administered vaccines to cover just 10% of its population and India 14%, compared to 46% of the European Union’s population and 52% in the U.S., according to Bloomberg’s Vaccine Tracker. Lacking enough immunizations, the developing world is bearing the brunt of rising case counts and death tolls, with global fatalities reaching 4 million earlier this month.

Indonesia’s country’s positive Covid test rate has reached about 27%, while India’s rate is 2%. Larger numbers indicate a government is only testing the sickest patients, and that there are high levels of undetected infection in the community. Experts say both nations are under-counting cases and deaths by a wide margin given their lack of testing infrastructure.

Curbs imposed on Java and tourism spot Bali from July 3-20 haven’t eased people’s movements as much as the government had expected.

Residents’ mobility has only eased by 6% to 16% since the restrictions were put in place, whereas authorities had expected a 20% drop, Health Minister Budi Gunadi Sadikin said in a hearing with lawmakers on Tuesday. The government had earlier said that a 50% reduction in mobility was needed to reduce Covid’s spread.

“Our hospitals can’t endure it anymore if we fail to reduce movement by at least 20%,” Sadikin said.