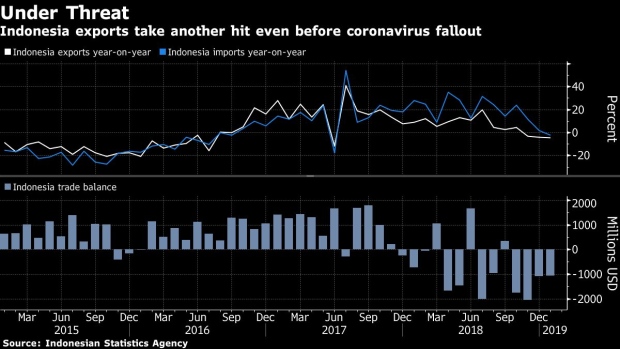 Workers unload a crate of freshly caught fish from a fishing boat at the Muara Angke port in Jakarta, Indonesia, on Tuesday, Sept. 27, 2016. Indonesia's central bank has loosened monetary policy this year to help spur an economy that's growing well below the 7 percent target set by President Joko Widodo when he took office two years ago. Photographer: Dimas Ardian/Bloomberg , Bloomberg

(Bloomberg) -- Terms of Trade is a daily newsletter that untangles a world threatened by trade wars. Sign up here.

Exports fell 3.7% from a year ago versus a median estimate for a surplus of 1.2% in a Bloomberg survey of economists, the statistics office said Monday. Imports declined 4.8%, resulting in a trade deficit of $864 million, more than twice the $375 million shortfall forecast in the survey.

While Indonesia is yet to record a single case of the deadly virus, the government is sounding alarms bells over a potential hit to Southeast Asia’s biggest economy. Growth prospects are at risk and the budget is under pressure, the finance minister said. “In terms of supply chains, you can’t exclude China and say it is only China’s problem, this will be a global problem,” Indrawati said Monday in Jakarta. The underlying assumptions contained in the state budget must be watched “very carefully” because they may deviate, she said, adding that the forecast for growth is under threat.

Indonesia’s central bank cut interest rates four times last year to spur growth, which is projected to reach 5.3% this year. It’s been on hold for the past three policy meetings, and economists are divided on whether the bank will act this week. “The impact of Covid-19 through merchandise trade channels is expected to take its toll within the next three months,” said Wisnu Wardana, an economist at PT Bank Danamon in Jakarta. He said he expects Bank Indonesia to stay on hold Thursday.