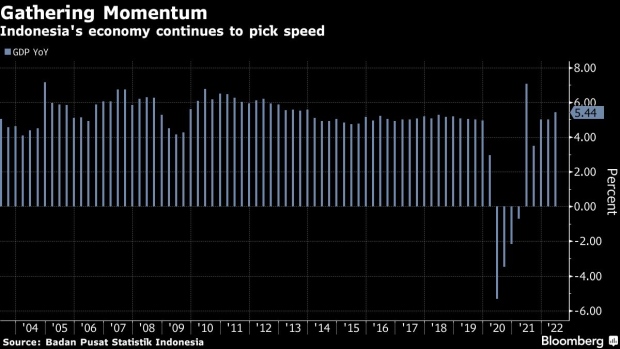 Customers at the Pasar Hindu in Medan, Indonesia, on Thursday, May 26, 2022. Bank Indonesia sees economy growing 4.7%-5.5% next year, a slight increase from its 2022 estimate of 4.5%-5.3%, Governor Perry Warjiyo says in parliamentary committee meeting Tuesday. , Bloomberg

(Bloomberg) -- Indonesia’s economy expanded better than estimates in the second-quarter, powered by a commodity-led exports boom and robust spending that could nudge the central bank to begin its rate liftoff.

Gross domestic product grew 5.44% in the three months to June from a year ago, the statistics bureau said on Friday. That’s the fastest increase in four quarters and beats the median estimate of a 5.17% gain in a Bloomberg survey. Compared with the previous quarter, GDP expanded 3.72%, beating the consensus for a 3.47% rise.

“Indonesia’s economy grew impressively in the second quarter amid global inflationary pressures and recession risks, showing that our recovery trend continues and even strengthens,” Margo Yuwono, head of the statistics office, said at the briefing in Jakarta.

Southeast Asia’s largest economy is steadily gaining momentum after a broader reopening that spurred mobility and travel especially during the Ramadan and Eid holidays. Growth in private consumption, which makes up more than half of domestic output, quickened to 5.51% last quarter from 4.34% in the January-March period.

Subsidies, social assistance and an “accommodative policy rate have been effective in maintaining inflation and purchasing power” during the period, Yuwono said.

Indonesia’s benchmark stock index was unchanged as of 10:40 a.m. local time, while the rupiah gained 0.2% against the dollar.

While Indonesia’s inflation hasn’t soared as much as neighbors like Thailand and the Philippines, headline consumer price gains have breached the central bank’s target and were at a seven-year high in July. Even the core inflation measure tracked by Bank Indonesia is closer to the mid-point of its 2%-4% goal.

“The fact that the Indonesian economy is doing well should give Bank Indonesia both the space to hike rate and a reminder nudge of the risk of not tightening,” said Oversea-Chinese Banking Corp. economist Wellian Wiranto, adding he still sees a “good chance” of a rate hike this month.

Indonesia’s stronger momentum in the second quarter defied headwinds from higher inflation, financial market volatility and the tapering of fiscal stimulus. The question in Bank Indonesia’s mind will be whether this resilience -- underpinned by the release of pent-up demand from reopening and soaring prices for commodity exports -- has staying power

Meanwhile, exports jumped 19.74% as the world’s largest palm oil exporter enjoyed a windfall from rising commodity exports and the growth rebound among its trading partners. Its trade surplus widened to $15.55 billion in the second quarter, up 148% from the same period a year ago. That’s despite a brief export ban on palm oil in April.

Still, policy makers may tread with caution due to global recession risks sparked by an aggressive monetary tightening in the US and stumbling growth in China. Bank Indonesia recently projected that GDP growth could tilt below the midpoint of its 4.5%-5.3% target range this year amid uncertainty to the global outlook.

Other highlights from the second-quarter GDP data:

(Updates with more details throughout)