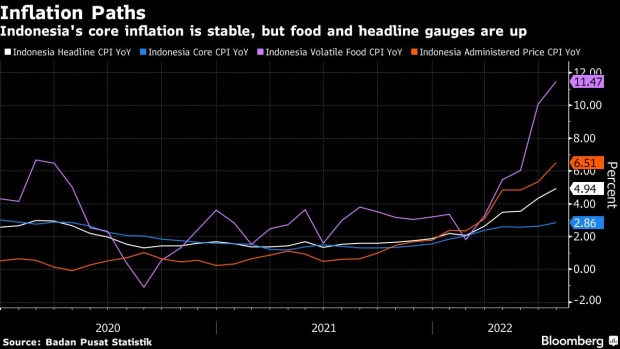 (Bloomberg) -- Bank Indonesia will probably focus on stagflation risks on the horizon and delay hiking the policy rate even after second-quarter data suggested the economy is on a steadier footing.

Record-low interest rates will support working capital and investment, Hartarto said, even as elevated commodity prices are seen to help drive full-year GDP growth to 5.2%. That’s more upbeat than the central bank’s view that growth will come in at the lower end of its 4.5%-5.3% forecast.

It’s a view backed by the likes of Satria Sambijantoro, economist at PT Bahana Sekuritas in Jakarta, who also drew attention to investment growth slowing to 3.07% last quarter from 4.09% in January-March. “The higher-than-expected GDP print was mostly driven by pent-up demand, and we doubt it will be sustainable in the upcoming quarters,” he said.

Still, other analysts believe that Bank Indonesia should get its rate lift-off underway as soon as its meeting this month, with headline and volatile food inflation soaring. It would also ease pressure on the rupiah, whose sharp drop eroded roughly $4.21 billion from the central bank’s foreign exchange reserves in July.

“The good outturn thus far should give Bank Indonesia the comfort it needs in knowing that any rate hike now would not necessarily push the economy southward” said Oversea-Chinese Banking Corp. economist Wellian Wiranto. “Indeed, the strength should be seen as a reminder of the risk that inflation could feed on itself at a time that growth momentum is that strong,”