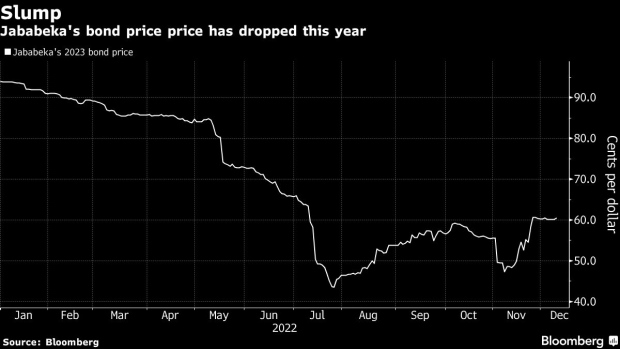 (Bloomberg) -- Indonesia’s PT Kawasan Industri Jababeka secured the backing of creditors to exchange nearly 90% of its $300 million of debt due in 2023 for new bonds, which S&P Global Ratings said would help its finances.

The junk-rated company said investors offered up 2023 notes with an aggregate principal of $265.5 million to be exchanged for new bonds maturing in 2027. Bond holders who didn’t participate in the swap are expected to receive money next year.

The company runs an industrial complex east of Jakarta about the size of Manhattan, and its plan to exchange its bonds is evidence of the mounting difficulties faced by real estate firms across Asia as interest rates rise. Korea’s credit market seized up in October after a developer defaulted on its deb.

The Indonesian builder sold the 6.5% bonds in 2016 to raise money for general corporate purposes, with ambitious plans to build industrial cities and tourist resorts across the country. But some of those projects were derailed by the pandemic and a 2018 tsunami.

The price of Jababeka’s 2023 bond has dropped by more than a third this year, and both Fitch Ratings and S&P Global Ratings raised red flags when Jababeka announced the exchange, as they considered the terms unfavorable.

The latter agency downgraded Jababeka to selective default on Friday but also cited the imminent prospect of an upgrade. The company’s 2023 bond was up 0.3 cents to 60.396 cents on the dollar on Friday.

“We will likely raise our ratings on Jababeka in the coming days to ‘CCC+’ if the settlement of the new notes proceeds as the company intends,” S&P wrote in a statement. “This reflects our view that the sustainability of Jababeka’s capital structure will depend on the company’s ability to increase its positive free operating cash flow.”

S&P had cut the company’s rating to CC from CCC in November.