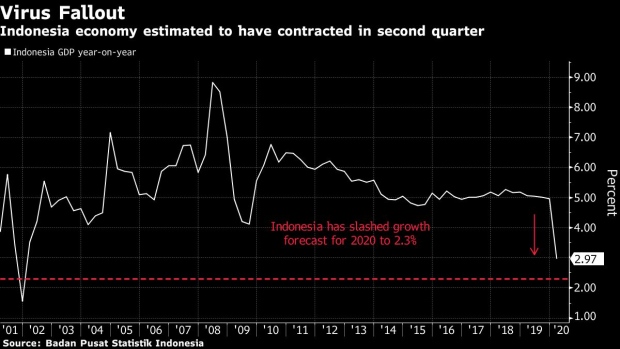 Indonesia’s economy may grow even less than already reduced estimates, and the fiscal deficit will widen further, as the government ramps up its response to the Covid-19 pandemic, the country’s finance minister said.

The deficit is now projected to widen to 6.34% of gross domestic product, Sri Mulyani Indrawati told reporters in an online briefing Wednesday. That’s the latest of several revisions since the government announced just over two months ago that it was suspending its 3% ceiling.

The economy will expand less than the 2.3% currently forecast for this year, she said, adding that she hoped it would still achieve some growth.

Officials remain hopeful the economy “will not decline very sharply” in the second quarter, and can begin to recover after that, Indrawati said. “The increase in the deficit will be maintained carefully, as per the president’s instructions, in terms of sustainability and financing.”

Earlier Wednesday, President Joko Widodo ordered Indonesia’s financial chiefs to expedite an economic recovery program, but also told them to mitigate fiscal risk, amid warnings that the nation’s credit rating could be in jeopardy.

Any additional spending must be balanced against “our various fiscal risks going forward,” Jokowi, as the president is known, said at a cabinet meeting. “Changes in the budget’s posture must be carried out carefully and transparently,” he said, adding that it was crucial to maintain credibility with investors.

Read: World Bank Calls on Indonesia to Curb Debt Amid Concerns Over Creditworthiness

The World Bank last month urged Indonesia to take steps to maintain confidence in its creditworthiness and to reinstate the 3% deficit ceiling. It also said the central bank should end its partial financing of the deficit. The Washington-based lender predicts Indonesia’s economy will have zero growth this year, and could even contract 3.5% under a worst-case scenario.

Bank Indonesia began buying bonds directly from the government this year to help finance the fiscal response to Covid-19. The central bank has bought 26 trillion rupiah ($1.8 trillion) in bonds from the primary market since April 21, Governor Perry Warjiyo said Wednesday.

The central bank’s policy arsenal would continue to be aimed at supporting the recovery, including maintaining confidence among investors, Warjiyo said.

(Updates with details of fiscal deficit from second paragraph)