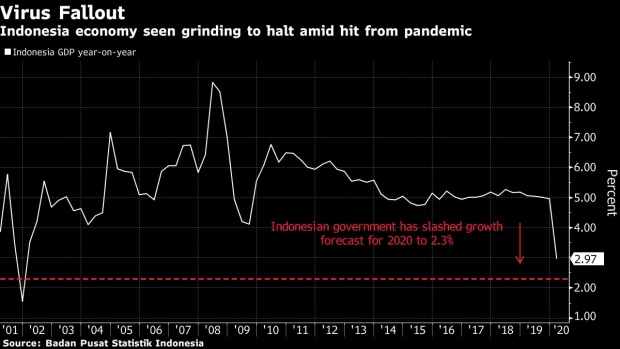 (Bloomberg) -- Indonesia’s central bank unexpectedly left its key interest rate unchanged for a second month to help bolster the currency in the face of a flagging economy and volatile financial markets.

Bank Indonesia held its seven-day reverse repurchase rate steady at 4.5%, following rate cuts in February and March. Only six of 25 economists expected the bank to stay put Tuesday, with the rest predicting a 25 basis-point cut.

“This decision considers the need to maintain exchange rate stability amid the uncertainty of global financial markets, although Bank Indonesia sees room for lower interest rates as inflationary pressure is low and there is a need to encourage economic growth,” Governor Perry Warjiyo said in an online briefing.

The Covid-19 pandemic is taking a heavy toll on trade and consumer spending in Southeast Asia’s biggest economy, with the government slashing its growth projection for this year to 2.3% from an initial 5.3%. The government has taken unprecedented emergency fiscal measures to fight the outbreak, abandoning a budget deficit ceiling of 3% of gross domestic product as it accelerates spending. It now projects this year’s deficit at more than double that cap.

The central bank’s extended pause underscores ongoing concerns about currency weakness and financial market stability. Warjiyo said Tuesday the rupiah remains undervalued and the central bank would intervene in markets as needed to support it.

The currency has fallen more than 6% against the dollar since the start of the year -- making it the worst performer in Asia -- although it has rallied in recent weeks. The rupiah held gains made earlier in the day and was up 0.4% at 14,797 per dollar at 2.30 p.m. in Jakarta.

“Given the weak first quarter growth and likely even weaker momentum since then due to broader Covid-19 outbreak and impact, the case for a cut to help growth has clearly risen of late,” said Wellian Wiranto, an economist at Oversea Chinese Banking Corp. in Singapore. “Hence, BI’s reluctance to ease is even more stark.”

The central bank has lowered its benchmark rate by a total of 150 basis points since last year to support an economy that was slowing even before the virus outbreak. On Tuesday, the bank maintained its inflation forecast of 2%-4% for this year, saying that level could allow the bank to lower the benchmark interest rate further.

Warjiyo said the current-account deficit, one of Indonesia’s chronic vulnerabilities, would be below 1.5% for the first quarter of the year, and below 2% for all of 2020. However, this was due mostly to a sharp fall in imports, emphasizing the weakness of domestic demand.

(Updates with comments from governor in third paragraph.)