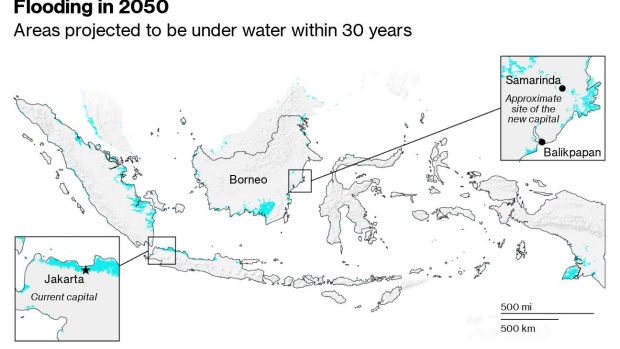 The Balikpapan-Samarinda Toll Road stands under construction in this aerial photograph taken on the outskirts of the port city of Balikpapan in East Kalimantan, Borneo, Indonesia, on Tuesday, Nov. 26, 2019. For Jakarta, a city on the island of Java saddled with some of the worst superlatives in the region⁠—most polluted, most congested, fastest sinking⁠—the floods were an old story, the third time deluges have killed dozens since 2007. The problems have become so overwhelming that, even before the latest catastrophe, President Joko Widodo had decided to build a new capital 1,200 kilometers away on the island of Borneo. Photographer: Dimas Ardian/Bloomberg , Bloomberg

(Bloomberg) -- Indonesia will start construction of government buildings at its new capital in August, as President Joko Widodo pushes ahead with his $34 billion ambition to build the city from scratch.

The Minister of Public Works and Housing Basuki Hadimuljono told Jokowi as the president visited the site where the state palace would be built. The government will also start developing infrastructure at Nusantara, as the capital will be known, including water systems, sanitation and toll roads, the minister said.

Indonesia plans to move its capital to East Kalimantan, from Jakarta, to bring more wealth and development outside of the wealthiest island of Java. Nusantara is being planned as an environmentally-friendly city that will use entirely renewable energy, despite criticism that its construction could threaten one of the world’s oldest rainforests.

“What is most important is that we want to be Indonesia-centric, not Java-centric,” Jokowi said on Wednesday. “When we draw a line from west to east and north to south, the center point is this East Kalimantan province.”

He invited media leaders to survey the site and spoke with university students about the new capital on Wednesday, seeking to garner support for the plan.