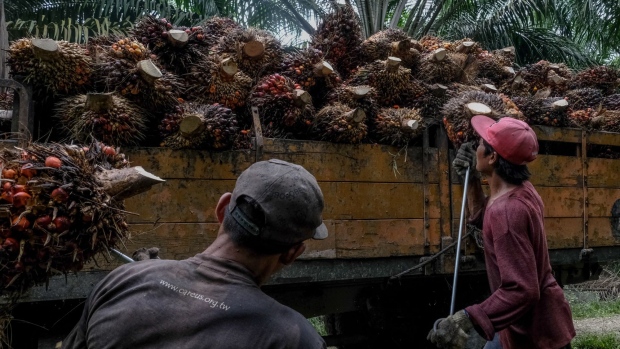 Workers load harvested palm oil fruit bunches onto a truck at a plantation in Kapar, Selangor, Malaysia, on Tuesday, Jan. 11, 2022. Palm oil swung between gains and losses as investors weighed weaker demand for the tropical oil against tighter supplies amid weather and labor problems in No. 2 grower Malaysia. , Bloomberg

(Bloomberg) -- Indonesia will temporarily stop sending more workers to Malaysia, demanding that its neighbor commit to agreements between the two nations to resolve labor issues.

Malaysia, which relies on migrant labor from countries including Indonesia, continues to struggle with shortages of workers in key sectors including palm oil, manufacturing and semiconductors. Both nations have two agreements in place aimed at ensuring protection for Indonesian migrant workers, said Setiawan.

“There are also issues such as labor wages, which have not been paid for years,” Setiawan said. Such problems prompted the Indonesian ambassador for Malaysia to recommend suspending orders for new workers and the ministry will follow up with a formal letter soon, he said.