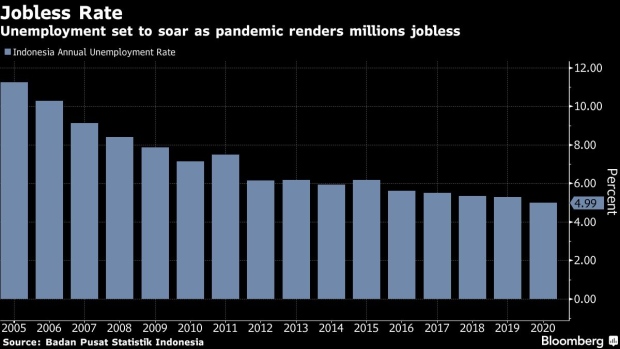 (Bloomberg) -- Indonesia’s decision to bring in hundreds of Chinese workers for multi-billion dollar nickel and stainless steel projects amid the coronavirus pandemic has drawn the ire of local workers, with a national labor union calling for their repatriation to save domestic jobs.

The arrival of Chinese workers “has hurt the sense of justice of local workers and Indonesian people” as the pandemic has already left millions of locals jobless, Said Iqbal, president of the Confederation of Indonesian Trade Unions, said by phone. The government should immediately cancel the permits for foreigners and give priority to domestic workers, he said.

Indonesia allowed Chinese-backed PT Virtue Dragon Nickel Industry and PT Obsidian Stainless Steel to bring in about 500 workers since June for specialist jobs in the smelters being constructed in South Sulawesi, sparking protests among the locals. The Coordinating Minister for Maritime Affairs and Investment Luhut Pandjaitan defended the visas for Chinese workers, saying “the presence of skilled workers will lead to creation of 5,000 jobs for the locals and transfer of technology.”

While Indonesia has witnessed protests against Chinese workers in the past, their arrival in the middle of the pandemic with millions struggling to find work in an economy devastated by the virus outbreak is turning the spotlight on investment from the Asian giant. The Southeast Asian country has aggressively wooed Chinese companies to develop its huge reserves of minerals and awarded a multi-billion high-speed rail project linking capital Jakarta to Bandung.

The Chinese workers at Virtue Dragon’s smelter projects and Obsidian’s stainless steel plants are allowed to stay for a maximum of six months and the projects will eventually employ 16,950 local workers, according to the Manpower Ministry. The Jakarta-Bandung rail projects under construction employs about 2,000 Chinese citizens.

“It would be wise if the government prioritized domestic workers, rather than foreign workers,” Iqbal said. “There are many workers who have lost their jobs during the Covid-19 pandemic.”

The pandemic is seen adding about 3.7 million jobless to some 7 million already without work, according to Planning Minister Suharso Monoarfa. New cases have surged across Indonesia in recent weeks after social-distancing rules were eased to help the economy. Confirmed cases now top 100,000 with almost 5,000 deaths, making it the epicenter of the outbreak in the region.