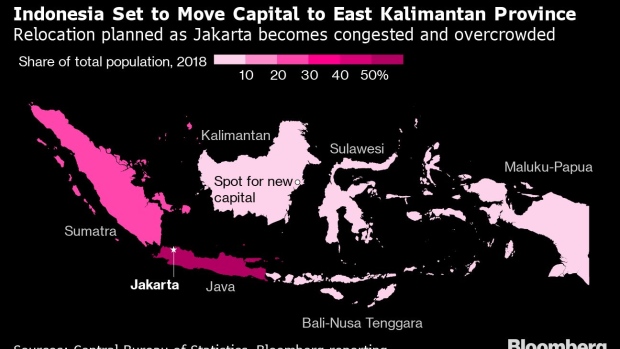 Vehicles travel along a road in Jakarta, Indonesia, on Wednesday, June 17, 2020. The country recently eased a partial lockdown, but more than two months of restrictions have ravaged businesses and left millions of people out of work, prompting the government to unveil stimulus worth more than $45 billion this year. , Bloomberg

(Bloomberg) -- Indonesia is pressing ahead with plans to build a new capital as billions of dollars in private sector investment is seen as key to reviving an economy battered by the coronavirus pandemic, a senior minister said.

President Joko Widodo’s administration is working with the parliament to pass a bill to lay the legal foundation to start work on the $33 billion new capital on the island of Borneo, Planning Minister Suharso Monoarfa said. It’s also finalizing a master-plan for the new city, he said.

While the plan has taken a backseat to allow the government to focus on stemming the pandemic and set aside almost $50 billion to cushion the blow to the economy, it will become a priority next year, said Monoarfa, whose ministry is drawing up the legal framework and design for the yet-to-be-named city. Jokowi, as the president is known, proposed the new capital last year to ease pressure on congested Jakarta, which is often hit by floods as parts of it lie below the sea level.

“Why should we continue with the new capital plan in the midst of a pandemic like this? The answer is that we need a locomotive that can deliver multiplier effects to the economy,” Monoarfa said in mobile phone text response to questions. “The capital project can create a lot of jobs and will have broad multiplier effects.”

Indonesia has identified about 256,000 hectares of land in East Kalimantan on the island of Borneo for the capital -- about four times the size of Jakarta. An estimated 100 trillion rupiah ($7 billion) a year in lost productivity due to traffic jam in the greater Jakarta area, home to almost 30 million people, and the need to spread economic growth beyond the main Java island have prompted the new capital plan.

The new city will sport world-class educational institutions, modern hospitals, botanical gardens and an environmentally-friendly transportation system, according to officials. Investors from China, the Middle East and the U.S. have shown interest in developing the city, Coordinating Minister for Maritime Affairs and Investments Luhut Pandjaitan has said.

The capital is proposed to be funded by a mix of government and private-public partnerships with bulk of the money coming from the private sector, according to Monoarfa. Abu Dhabi Crown Prince Mohammed Bin Zayed Al Nahyan, SoftBank Group Corp. founder and Chief Executive Officer Masayoshi Son and the U.S. International Development Finance Corp. have shown interest in investing in the new city, according to officials.

“There are not many large-scale investment projects of this size in today’s world,” Monoarfa said. “So we hope that investors will come in large numbers and this is a great opportunity for them.”

The government’s investment will be limited to building the basic infrastructure for the capital and a state spending of 10 trillion rupiah is set to draw at least 100-120 trillion rupiah of private sector funds, he said.

While authorities previously targeted a ground-breaking ceremony for the project in the fourth quarter of this year, Monoarfa acknowledged a delay due to the pandemic but didn’t set a new date for start of construction.

The government plans to move the capital in phases from 2024, with the new city eventually becoming home to as many as 6-7 million people.