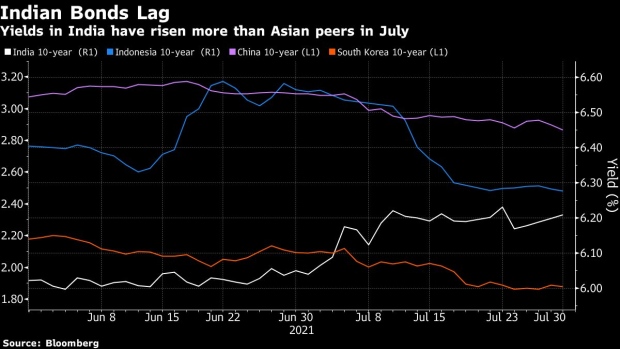 Stores at a market are closed due to lockdown restrictions in Jalgaon, Maharashtra, India, on Monday, July 19, 2021. More than two-thirds of India's population had antibodies against Covid-19, leaving a large chunk of its 1.4 billion people still vulnerable, a new national sero-survey has found. Photographer: Dhiraj Singh/Bloomberg , Bloomberg

(Bloomberg) -- India’s sovereign bond market is pricing in growing inflation risks, even as the central bank sees the price pressures as transient.

The yield on India’s benchmark 10-year bond jumped 16 basis points in July, the most among similar-tenor notes from other Asian sovereigns, as retail inflation remained persistently above the Reserve Bank of India’s 2%-6% target range.

Still, the RBI is widely expected to leave its key rates unchanged on Friday and continue with its easy monetary stance, as it prioritizes growth after the economy was ravaged by the deadly wave of Covid-19 infections. Governor Shaktikanta Das has insisted that recent inflation readings are only “a transitory hump.” Although, bond investors are skeptical.

The spike in inflation may not be transient and while some lower readings are in the offing, it will pick up from December, according to Marzban Irani, chief investment officer for debt at LIC Mutual Fund Asset Management Ltd. “Yields are already at ultra low levels and need to correct. I see the 10-year going to 6.5% and then even to 7% in a year’s time,” he said.

The RBI, unlike central banks in New Zealand and South Korea, is constrained from taking a hawkish stance as India’s economic recovery is still nascent. Growth showed signs of cooling in June as the slow easing of lockdowns hurt activity. Economists still see consumer inflation picking up pace to 5.7% and 5.2%, respectively, for the final two quarters of 2021, according to a Bloomberg survey.

India’s central bank has so far managed to keep yields low by conducting bond purchases, softening the blow from the near-record amount of sovereign debt sales this fiscal year, but there are signs that traders’ patience is wearing thin. The benchmark 10-year bond yield surged to 6.23% last month, the highest since March, as investors pushed for higher yields at an auction, prompting the RBI to seek help from underwriters to rescue the sale.

Even though steady rates are a given at this week’s rate review, any talk of policy normalization could further pressure bond yields higher. However, traders aren’t ruling out unconventional moves that the RBI is known to do as it navigates the growth versus inflation dilemma.

“The Governor has been clear that the policy focus remains on revival of growth,” said Suyash Choudhary, head of fixed income at IDFC Asset Management Ltd. “Inflation will likely continue to be viewed as transitory and focus will remain on orderly evolution of the yield curve.”