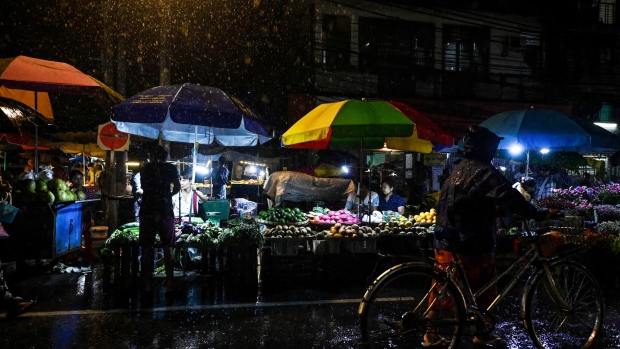 (Bloomberg) -- Myanmar’s economy remains weak due to high inflation and worsening external pressures amid “elevated levels of conflicts,” according to the World Bank.

The economy is likely to expand 3% this year after contracting a steep 18% last year, said Aaditya Mattoo, chief economist for East Asia and Pacific. The World Bank didn’t issue a growth outlook for 2023 in the report, as some parts of Myanmar’s economy such as manufacturing and construction are struggling, he said.

Myanmar is grappling with soaring inflation and shrinking foreign-currency reserves amid international sanctions following the 2021 coup. Frequent power outages and commodity shortages along with a lingering conflict between pro-democracy groups and the military government is hampering an economic recovery.

The kyat plunged by more than a third last year, prompting the central bank to move to a fixed rate of exchange. World Bank said it may issue its 2023 forecast for Myanmar in subsequent reports.

“There are logistics disruptions which are leading to food shortages and increasing retail prices, further straining household income,” Mattoo said. “We are concerned about it despite slight revival in manufacturing and construction. Overall, we do think there are difficulties that Myanmar’s economy still faces.”

Price pressures will remain high due to the impact of kyat depreciation, logistics constraints, and still-high global oil prices, the World Bank said. Policy uncertainties and the reversal of earlier reforms have inhibited trade and investment in the Southeast Asian country, it said.

While interventions and administrative controls in the foreign exchange market may initially reduce external liquidity pressures, they will have broader negative impact, the World Bank said. The foreign exchange crunch may prevent imports of critical commodities and lead to supply shortfalls.

(Updates with World Bank plan for 2023 Myanmar outlook in next reports.)