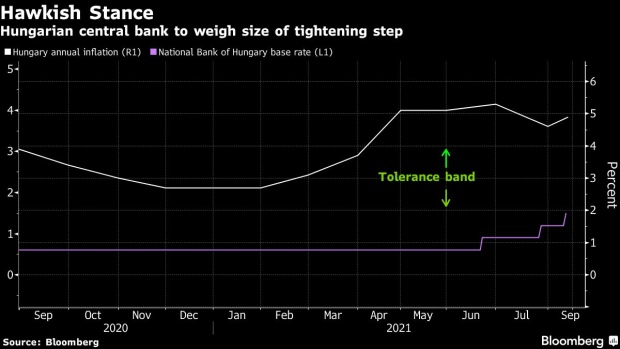 A vendor calculates a price on a fresh produce stall inside Lehel Market in Budapest, Hungary on Thursday, Aug. 26, 2021. Hungary’s economy shot higher by a record amount in the second quarter as the economy rebounded from its worst-ever three-month contraction during the height of the pandemic. Photographer: Akos Stiller/Bloomberg , Bloomberg

(Bloomberg) -- Hungary’s soaring price growth is leaving the central bank little room to slow the most aggressive monetary-tightening campaign in the European Union.

Policy makers may raise the benchmark rate by a quarter-point on Tuesday to 1.75%, according to the median estimate in a Bloomberg survey, only marginally less than the 30 basis-point in increases in each of the past three months. Seven of 20 economists expect the central bank to keep up that pace of tightening for a fourth month.

With Prime Minister Viktor Orban pushing for a 20% increase in the minimum wage and continued stimulus to help him clinch a fourth consecutive term in next year’s elections, the central bank has little maneuvering room to slow its tightening campaign.

New forecasts to be published Tuesday are expected to show an upward revision on the inflation outlook after price-growth significantly outstripped earlier estimates and stayed above the 4% top of the bank’s tolerance band.

“Recent inflation surprises have created uncertainties over when price growth will start to slow and how quickly,” Agata Urbanska-Giner, a London-based economist at HSBC, said in a research note. “We think this will likely prompt the NBH to extend its strategy of pre-emptively delivering above-expectation hikes in part to support the forint, which remains the main near-term policy-transmission channel.”

The forint has weakened 1.3% against the euro this month, the second-biggest drop among central European emerging-market currencies after the Polish zloty. Unlike Hungary and the Czech Republic, Poland has put off monetary tightening out of concern that it may damage the economic recovery from the coronavirus pandemic.

Investors are raising bets for further monetary tightening in Hungary. They now expect the three-month Budapest interbank rate -- which is already 12 basis points above the benchmark rate -- to rise by a further 72 basis points this year.

While policy makers have said tapering would be gradual, they’d be better off scrapping weekly targets in favor of a flexible approach, according to Bank of America economist Mai Doan. The move may help create room for policy makers to slow the pace of tightening, she said.

“Any shift of the central bank’s tightening focus from interest rate policy to adjustments in QE operations would benefit the forint,” Doan said.