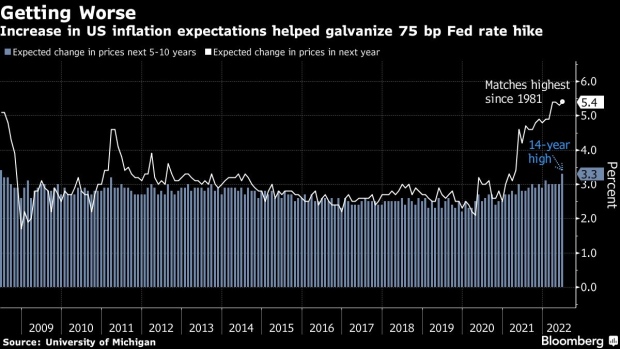 A worker stacks crates of fresh produce ready for dispatch to stores inside a warehouse at the Sonae MC food logistics hub in Azambuja, Portugal, on Monday, May 17, 2022. Global food prices held near a record as crop trade is disrupted by the war in Ukraine, exacerbating tight supplies and stoking inflation. Photographer: Goncalo Fonseca/Bloomberg , Bloomberg

(Bloomberg) -- The world’s central bankers are unleashing what may prove to be the most aggressive tightening of monetary policy since the 1980s, risking recessions and roiling financial markets as they rush to tackle the surge in inflation they didn’t see coming.

The week began with a sudden shift on Wall Street to price in a 75 basis point interest-rate increase by the Federal Reserve. The US central bank delivered that on Wednesday -- the biggest move since 1994 -- as Chairman Jerome Powell declared himself “strongly committed to bringing inflation back down.”

Switzerland unexpectedly raised rates the next day, while the Bank of England hiked shortly after by 25 basis points for a fifth time and signaled it will soon double the pace.

The bond market’s reaction to the concerted withdrawal of stimulus proved so violent the European Central Bank Wednesday held an emergency meeting to address surging yields in some euro-zone members. Emerging markets from Brazil to Taiwan to Hungary also lifted borrowing costs, while Australia, South Korea, India, New Zealand and Canada are among those preparing more action.

Only the Bank of Japan bucked the trend, maintaining its ultra-easy settings on Friday despite fierce market pressure to leap on the global bandwagon.

China also stands out as an exception, but traders around the world are bracing for a series of rate hikes many will not have witnessed in their entire careers. Fed officials alone are projecting they will take their benchmark to 3.8% by the end of 2023, from the 1.5%-2% range it hit this week, and several Wall Street banks see an even higher peak.

Policy makers are being forced to act in part because they failed to spot the sticking power of inflation’s rise to multi-decade highs. They were then slow to respond even when they accepted the price pressures weren’t “transitory.” 2022 began with US rates still near zero and the Fed sucking in Treasuries and mortgage-backed securities.

The  scramble to regain control raises the threat of unintended consequences, including recessions and higher unemployment. Its also a recipe for volatile financial markets.

“It is looking pretty chaotic in terms of the economy and the challenges facing central banks,” said Nathan Sheets, global chief economist at Citigroup Inc. and a former Fed official. “The defining feature of this hiking cycle relative to others we’ve seen over the last 30 years is that central banks are not just incrementally behind the curve, they are significantly behind.”

The latest drama began with last Friday’s news of another jump in US inflation. When media reports emerged Monday that the Fed would actively consider a three-quarter point rate move, government bond yields surged anew, and the S&P 500 tumbled into a bear market. Ten-year US yields were around 3.2% Thursday, more than double the start of the year.

Global shocks to demand and supply over the past two years -- caused by the pandemic, switching in and out of lockdowns, historic stimulus packages and Russia’s invasion of Ukraine -- have all contributed to a sea-change for monetary policy.

After spending recent decades assuming they had tamed prices perhaps too much, officials are now having to clamp down on growth and hiring. Inflation is more than triple the Fed’s target and heading into double figures in the UK.

“What we have to understand -- and markets are coming to terms with this -- the more aggressive you focus on inflation, the more you’re going to have output volatility and stress in financial markets,” former SNB President Philipp Hildebrand, now a vice chairman at BlackRock Inc, told Bloomberg Television.

The Fed’s increasing hawkishness also puts pressure on its peers, by driving up the dollar and contributing to a global selloff in bonds. Italian 10-year yields hit their highest since 2014 on Tuesday and the yen is at its weakest in 24 years.

The ECB is now crafting a tool it hopes will insulate its vulnerable economies from higher yields, while the Bank of Japan on Friday added exchange rates to its list of risks. Some are talking of “reverse currency wars,” the mirror image of the early 2010s, when key nations were accused of preventing currency appreciation in order to stoke growth. Today, a strong exchange rate is popular.

“We are in an integrated global capital market,” said Julia Coronado, co-founder of MacroPolicy Perspectives LLC. “If the Fed goes a lot faster, that’s going to strain the currencies and make the jobs of the other central banks a lot harder.”

Hildebrand said it’s unlikely the Fed can engineer a soft landing. Bloomberg Economics pegs the chance of a US recession at 72% by the end of next year, which will challenge the re-election hopes of President Joe Biden.

Those on the front lines of the world economy are also picking up on the new reality.

American and European customers are now warning of a weakening market for the second half of this year and probably for a good part of 2023, said Fernando, whose firm employs 115,000 people across 16 countries.

“We are hoping the central banks are right that it’s going to be a soft landing.”