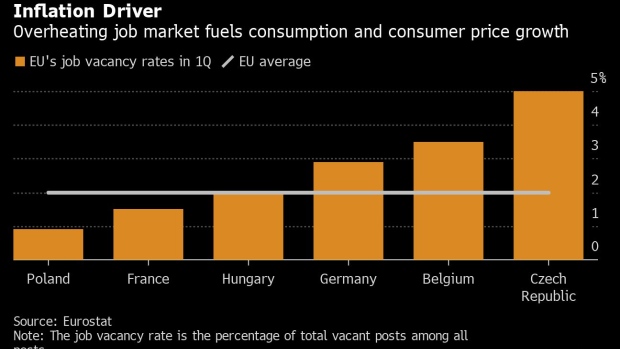 A CNB sign at the entrance to the Czech central bank (CNB) in Prague, Czech Republic, on Wednesday, March 24, 2021. Prime Minister Andrej Babis urged the central bank to keep borrowing costs low and share some of its profits with the state budget to help fund the economic recovery from the coronavirus crisis. Photographer: Milan Jaros/Bloomberg , Bloomberg

The Czech central bank should keep lifting interest rates at a swift pace as persistent inflation constitutes a bigger risk than new coronavirus variants, according to Deputy Governor Tomas Nidetzky.

The economy -- one of two, alongside Hungary, within the European Union to start lifting borrowing costs in June -- is rebounding significantly faster than the bank previously forecast, Nidetzky said Tuesday in an interview. He supports another rate increase next week and “can imagine” hikes at each subsequent policy meeting until new factors emerge to stop the cycle.

Generous government spending and a labor shortage have kept inflation above the 2% target even as the country suffered one of the world’s deadliest Covid-19 outbreaks.

Vaccination progress, acquired immunity and reliance on manufacturing rather than services should limit the economic hit if the pandemic worsens again, making new blanket lockdowns unlikely, according to Nidetzky.

“We’re learning to live with Covid,” he said. “We should use our very comfortable situation to normalize rates at a relatively fast pace.”

The hawkish approach by the Czechs and Hungarians contrasts with prolonged monetary stimulus in the euro area, the U.S. and neighboring Poland, where central banks say current inflation pressures will ease with time.

Policy makers in Prague have earned a reputation for making fast and bold moves to manage consumer-price growth. When the pandemic hit Europe in spring 2020, they cut interest rates by the most in the EU, reversing the bloc’s biggest campaign of increases during the previous three years.

In June, the central bank’s updated forecast suggested raising the benchmark by a half-point, but the board opted for a standard quarter-point increase to 0.5% to avoid creating the impression of panic, according to Nidetzky.

“Despite the continued risks and uncertainties, we wanted to send a signal that we simply won’t tolerate elevated inflation, that we take inflation targeting seriously and that we really don’t want inflation expectations to become unanchored,” he said.

Money-market bets show investors are positioned for a quarter-point rate increase on Aug. 5 and at least two more later this year.

While the effect of elevated commodity prices and supply bottlenecks may gradually fade, the deputy governor expects an “overheated labor market” to keep pushing Czech wages and consumer prices higher.

The country of 10.7 million people entered the pandemic with the EU’s lowest unemployment rate, and it still has more job vacancies than those without work, even after a hard four-month lockdown that ended this spring.

“That’s what sets us apart from many other countries,” Nidetzky, 51, said. “Our labor market hasn’t cooled down and is in fact back where it was before the pandemic. For me personally, that’s a very important part of the whole picture.”