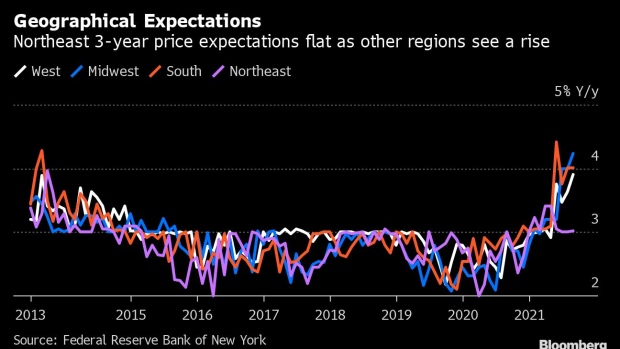 (Bloomberg) -- Inflation expectations among U.S. consumers over the medium term rose to the highest level on record in the Federal Reserve Bank of New York’s surveys, according to the latest edition published Monday.

Consumers said they expect inflation at 4% over the next three years, up 0.3 percentage point from a month earlier.

The median expectation for the inflation rate in a year’s time also rose by 0.3 percentage point to 5.2% in August, the tenth consecutive monthly increase and a new high in the series, which goes back to 2013.

The Fed survey showed that Americans are expecting higher rates of price increases for items like rent and food that make up a big chunk of the consumer-price basket, and can’t easily be substituted.

Economists surveyed by Bloomberg expect slightly lower rates of inflation. The latest poll, published on Sept. 10, forecast an average increase in prices of 4.3% this year and 3% in 2022.

Meanwhile, expectations that wages will keep pace with the acceleration in prices are starting to cool. The median one-year-ahead expectation for earnings growth dropped 0.4 percentage point to 2.5%, with respondents over the age of 40 largely driving the decline.