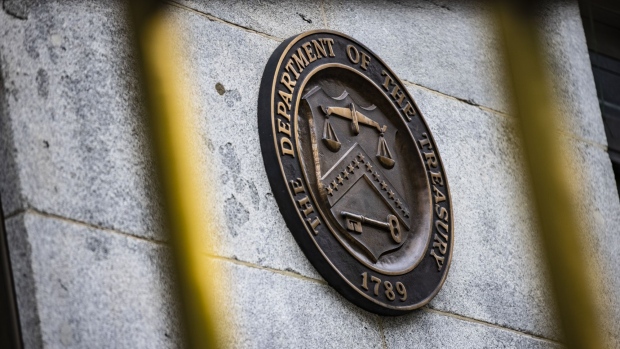 The U.S. Treasury building in Washington, D.C., U.S., on Sunday, Oct. 3, 2021. The global economy is entering the final quarter of 2021 with a mounting number of headwinds threatening to slow the recovery from the pandemic recession and prove policy makers' benign views on inflation wrong. Photographer: Samuel Corum/Bloomberg , Bloomberg

(Bloomberg) -- Market-implied expectations for U.S. inflation for the next half-decade surged to the highest in 15 years on Thursday amid the latest increase in commodity prices.

As some U.S. Treasury yields attained multimonth highs this week, demand for inflation-protected Treasuries has kept their yields relatively stable. The difference represents the inflation rate needed to equalize their returns.

For five-year maturities, the regular Treasury note’s yield reached 1.192% Wednesday, the highest level since March 2020. The five-year TIPS yield is around -1.70%, and a $19 billion sale of the securities ahead at 1 p.m. New York time may draw a record low auction yield.

The 2.86 percentage-point difference between the two rates reached Thursday is the highest since 2005. Ten- and 30-year breakeven inflation rates reached multiyear highs this week as well.

“Although there will be plenty of evidence that current inflation pressures are transitory, what we do see is a higher inflation rate on average next year than we’ve been used to for the last decade,” said Peter Chatwell, head of multi-asset strategy at Mizuho International Plc. “That’s the paradigm shift.”

Oil fell Thursday, but remains near a seven-year high.