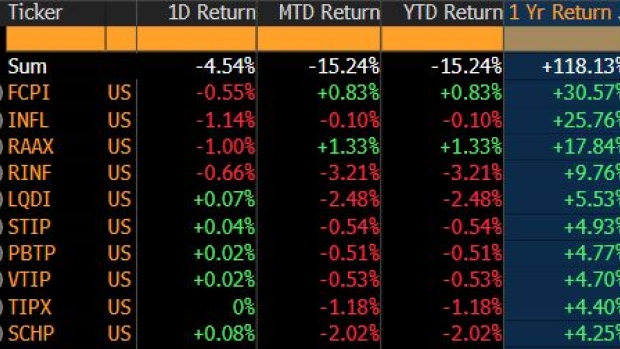 (Bloomberg) -- Inflation-fighting ETFs have struggled to live up to their label in the grip of the fastest price growth in nearly four decades, but that’s not stopping issuers from flooding the $7.1 trillion market with new offerings.

Within the past month, the Rareview Inflation/Deflation ETF (ticker FLTN), the AXS Astoria Inflation Sensitive ETF (PPI) and the Donoghue Forlines Yield Enhanced Real Asset ETF (DFRA) have all started trading, with more on the way.

Inflation is the hottest trade on Wall Street as supply chain snags and labor shortages drive up the cost of goods and wages in the world’s biggest economy. Even before the latest data confirmed the largest 12-month gain in consumer prices since June 1982, every single exchange-traded fund with “inflation” in its name or description had posted inflows in 2021.

“Getting investors’ attention is half the battle and the word ‘inflation’ is doing that right now,” said Eric Balchunas, a senior ETF analyst with BI. “People are looking for protection and ways to profit from it.”

While money is flooding in, performance is a mixed bag. In a November report, FactorResearch’s Nicolas Rabener found that U.S. inflation ETFs generally had low correlations to inflation expectations in the bond market known as breakeven rates -- and largely hadn’t kept up with price growth.

For example, the IQ Real Return ETF (CPI) has underperformed the U.S. consumer prices index since inception, Rabener points out. The SPDR SSgA Multi-Asset Real Return ETF (RLY) and VanEck Inflation Allocation ETF (RAAX) have done better and have posted positive real returns since their launch -- but only if you include 2021.

“We would argue that these funds should consistently beat inflation, not just occasionally,” he said by email. “That seems luck rather than skill.”

Bloomberg data show that in the past year only four U.S. ETFs with “inflation” in their name or description have returned more than the latest CPI reading of 7%. They were RAAX, the Horizon Kinetics Inflation Beneficiaries ETF (INFL), the Fidelity Stocks for Inflation ETF (FCPI) and the ProShares Inflation Expectations ETF (RINF).

There are still only 23 such funds, but at the rate new ETFs are arriving that tally could double in 2022, according to Bloomberg Intelligence’s Balchunas.

Several funds are already in the pipeline. The Amplify Enhanced Inflation Beneficiaries ETF is expected in the coming weeks, which will invest up to 80% of its holdings in assets likely to benefit from inflation, such as construction and mining stocks. The Harbor All-Weather Inflation Focus ETF is also pending and would invest in at least 15 of the 24 most liquid commodity futures, according to a filing.

The funds would help build out the growing stable of inflation-targeting strategies that go beyond just loading up on Treasury Inflation Protected Securities. Similar to Amplify’s application, the PPI fund invests across asset classes in securities that should benefit from rising costs. The iShares Inflation Hedged Corporate Bond ETF (LQDI) seeks to protect its portfolio of corporate bonds by positioning in inflation swaps.

While Federal Reserve chief Jerome Powell pledged Tuesday that the central bank will control inflation without sacrificing growth, price pressures have persisted far longer than many economists thought. There may also be more to come, with the omicron variant prompting further lockdowns across the globe, threatening the fragile supply chain anew.

Against that backdrop, the roster of inflation-fighting ETFs will only grow from here, according to The ETF Store’s Nate Geraci.

“The ETF industry isn’t one to miss out on an opportunity to serve up potential solutions,” said Geraci, president of the advisory firm. “The combination of last year’s strong inflows and this year’s inflation-dominated headlines will have ETF issuers in the lab cooking up new products.”