The cost of everything is going up fast, and we're in it for the long haul: Derek Holt

Canadian consumer price inflation accelerated to a new three-decade high in January, adding to pressure on the Bank of Canada to start raising interest rates as early as March 2.

Annual inflation was 5.1 per cent last month, up from 4.8 per cent in December, Statistics Canada reported on Wednesday in Ottawa. Economists were anticipating inflation would be unchanged in January.

The average of the central bank’s core measures -- often seen as a better indicator of underlying price pressures -- rose to 3.2 per cent, also the highest since 1991.

The report will reinforce expectations that policymakers, led by Governor Tiff Macklem, will start a rate-hike cycle at the next policy meeting. Markets are pricing in as many as seven increases in borrowing costs over the next 12 months. 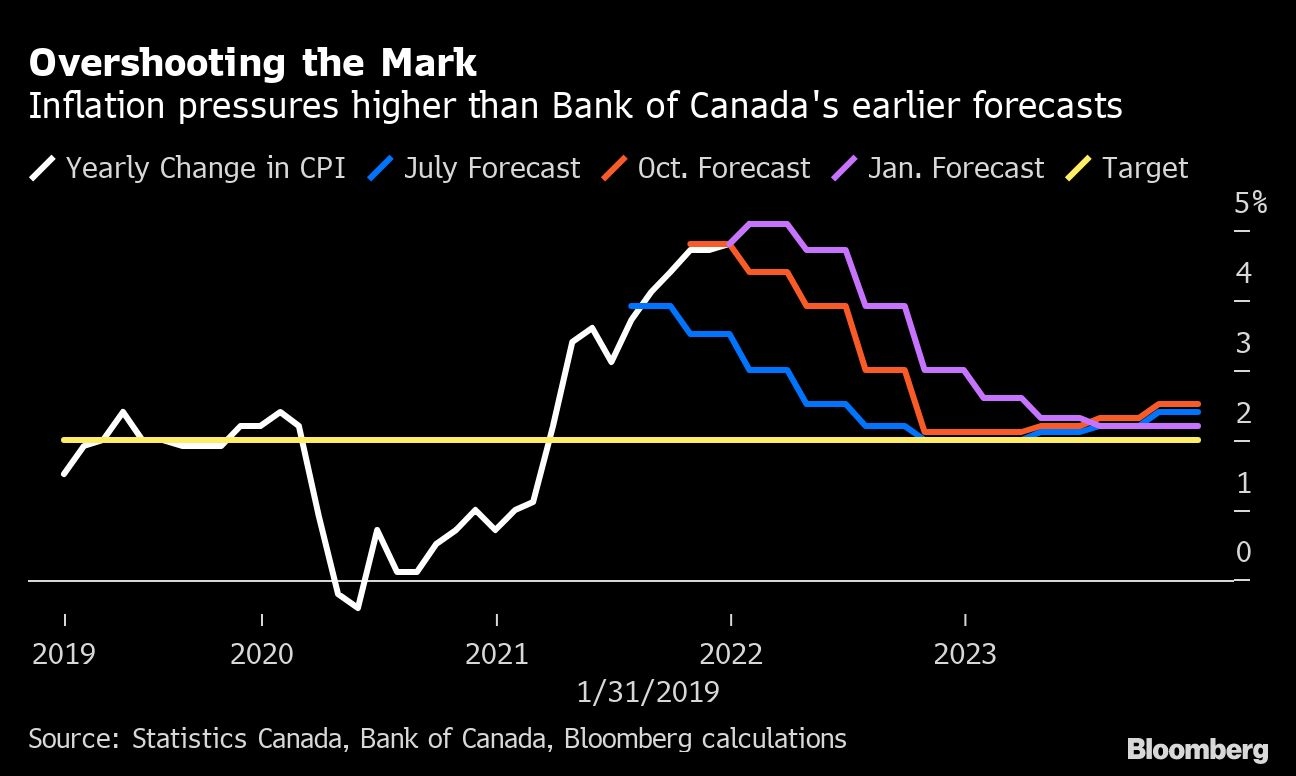 The Bank of Canada has held its benchmark at the emergency level of 0.25 per cent since March 2020, soon after the COVID-19 pandemic hit North America.

“With energy prices continuing to rise, inflation is set to accelerate even further and is unlikely to materially slow down before April,” Royce Mendes, head of macro strategy at Desjardins Securities Inc., said in a report to investors.

Inflation has now exceeded the central bank’s 1 per cent to 3 per cent control range for 10 straight months as global supply chain bottlenecks and labor shortages push up prices. Since Canada introduced inflation targeting in the early 1990s, the inflation rate has averaged about 1.8 per cent.

Economists are warning price gains will heat up further in coming months before fading later in 2023. Border blockades in recent weeks may only add to the inflationary pressure.

“With gasoline prices rising further in the first half of the month, a big dairy price increase hitting at the start of February, and the possibility of supply chain issues stemming from recent protests, headline inflation could push further above the 5 per cent mark before finally starting to moderate thereafter,” Andrew Grantham, an economist at CIBC Capital Markets, said in a report.

Inflation rising to slightly above 5 per cent was anticipated by the Bank of Canada, but the central bank expects inflation to slow to 3 per cent by the end of this year.

The numbers, however, show broad price pressures. Shelter costs rose 6.2 per cent in January, the fastest pace since February 1990, while prices for food purchased from stores rose 6.5 per cent, the largest yearly increase since May 2009.

On a monthly basis, prices rose 0.9 per cent in January, driven by a recovery in gasoline prices last month and higher costs for cars. Year-over-year, gasoline and housing costs have been the biggest drivers of higher inflation.

On a seasonally adjusted basis, consumer prices were up 0.6 per cent in January -- a historically strong pace of increases that suggests momentum remains elevated for inflation.

Data from the Labour Force Survey showed wages rose 2.4 per cent in January. That means on average prices rose faster than wages and Canadians experienced a decline in purchasing power.