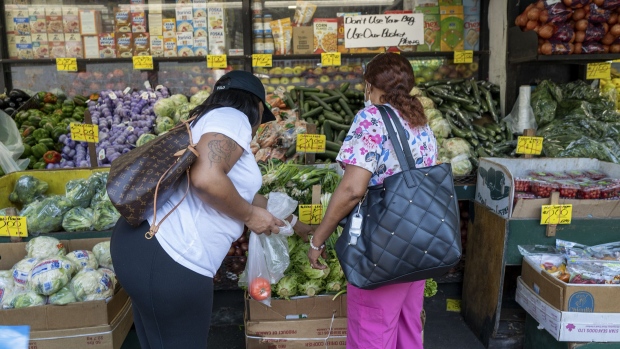 NEW YORK, NEW YORK - JUNE 15: People shop for food along a busy shopping street in the Flatbush neighborhood of Brooklyn on June 15, 2022 in New York City. As the American economy continues to see a rise in inflation, the Federal Reserve announced on Wednesday that it is raising interest rates by 0.75%, the largest such move since 1994. The Fed is attempting to cool the economy and keep prices on everyday items such as food, gas, and rent under control. (Photo By Spencer Platt/Getty Images) , Photographer: Spencer Platt/Getty Images North America

(Bloomberg) -- The high inflation rate plaguing American households is not hitting all groups evenly, with Black and Hispanic Americans being squeezed the most, according to research from the Federal Reserve Bank of New York.

“Inflation has risen sharply overall and especially for Black and Hispanic Americans,” New York Fed researchers wrote in a blog post published Thursday. “These facts are important to consider in pursuing a monetary policy that strives for maximum employment and price stability for all Americans.”

Fed officials are rapidly lifting interest rates as they work to rein in the hottest inflation in 40 years. The US central bank raised its benchmark rate by 75 basis points this month -- the biggest hike since 1994 -- and policy makers say they will debate another large move when they meet late next month.

Their projections show they expect to raise rates by 175 basis points by the end of the year and Chair Jerome Powell cautioned on Wednesday that efforts to cool prices could cause pain for households, but that more difficulty would ensue if inflation was not brought under control.

The Fed targets 2% inflation as measured by the personal consumption expenditures price index, which has risen 6.3% since May 2021, according to Commerce Department data released on Thursday.

The researchers estimated inflation rates for different demographic groups using survey data that showed differences in how each group spends money. For example, Black consumers spend more of their income on housing and transportation, and less on food and entertainment, when compared to White consumers.

In 2019, Asian Americans experienced slightly below average inflation, while Black and Hispanic Americans faced inflation that was slightly above average, but that changed during the pandemic.

Disparities in the labor market, however, are mostly back to pre-pandemic levels after they widened during the recession, the New York Fed found. By May 2022, the employment gap for Hispanic workers, when compared to average employment, was close to where it was before the crisis. The gap for Black workers was smaller than it was before the pandemic.

Those improvements are at risk of being reversed as the Fed raises interest rates to tame inflation, the researchers said. That’s because Black Americans tend to face steeper job losses than White workers when the Fed is raising rates, especially when the labor market is tight.

“Therefore, the recent rise in interest rates may undo some of the narrowing that we have observed,” they wrote. “However, it is important to note that the current interest rate increase is coming at a time when demographic gaps in employment rates are at some of their lowest levels in decades.”