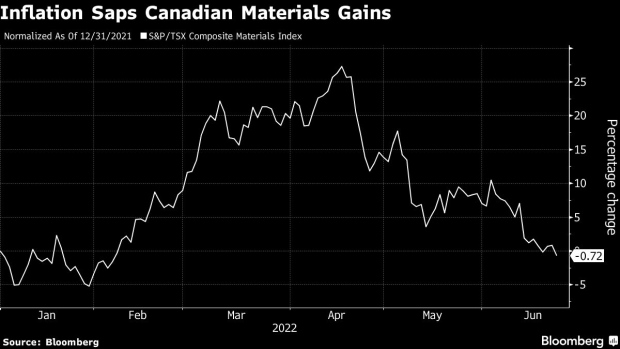 An exhibitor holds a 1 kilo bar of gold at the Prospectors & Developers Association of Canada (PDAC) conference in Toronto, Ontario, Canada, on Tuesday, June 14, 2022. As China lockdowns rekindle concerns over metals demand, mining leaders on the other side of the world shed masks and rubbed shoulders at one of the industry's biggest annual gatherings. Photographer: Cole Burston/Bloomberg , Bloomberg

(Bloomberg) -- Canadian mining, metals and lumber stocks dropped Wednesday, wiping out their 27% gain for this year as hotter-than-expected inflation, rising interest rates and slowing global growth weigh on the companies.

The S&P/TSX Composite Materials Index is now negative for the year after peaking in mid-April, when Russia’s invasion of Ukraine sent prices for commodities and natural resources soaring. Since then, the Bank of Canada has implemented its biggest interest rate increase in decades with a half-a-percentage-point hike on April 13, preceding a similar move by the US Federal Reserve.

“This is a bit of an unprecedented cycle,” Hodgins said, adding that in recent down cycles, central banks haven’t had to worry about inflation as they stepped in to lower rates. Now, with inflation surging at its fastest pace since 1983 in Canada, the bank has signaled rates will continue to rise.