U.S. consumer prices soared last year by the most in nearly four decades, illustrating red-hot inflation that sets the stage for the start of Federal Reserve interest-rate hikes as soon as March.

The consumer price index climbed 7 per cent in 2021, the largest 12-month gain since June 1982, according to Labor Department data released Wednesday. The widely followed inflation gauge rose 0.5 per cent from November, exceeding forecasts. 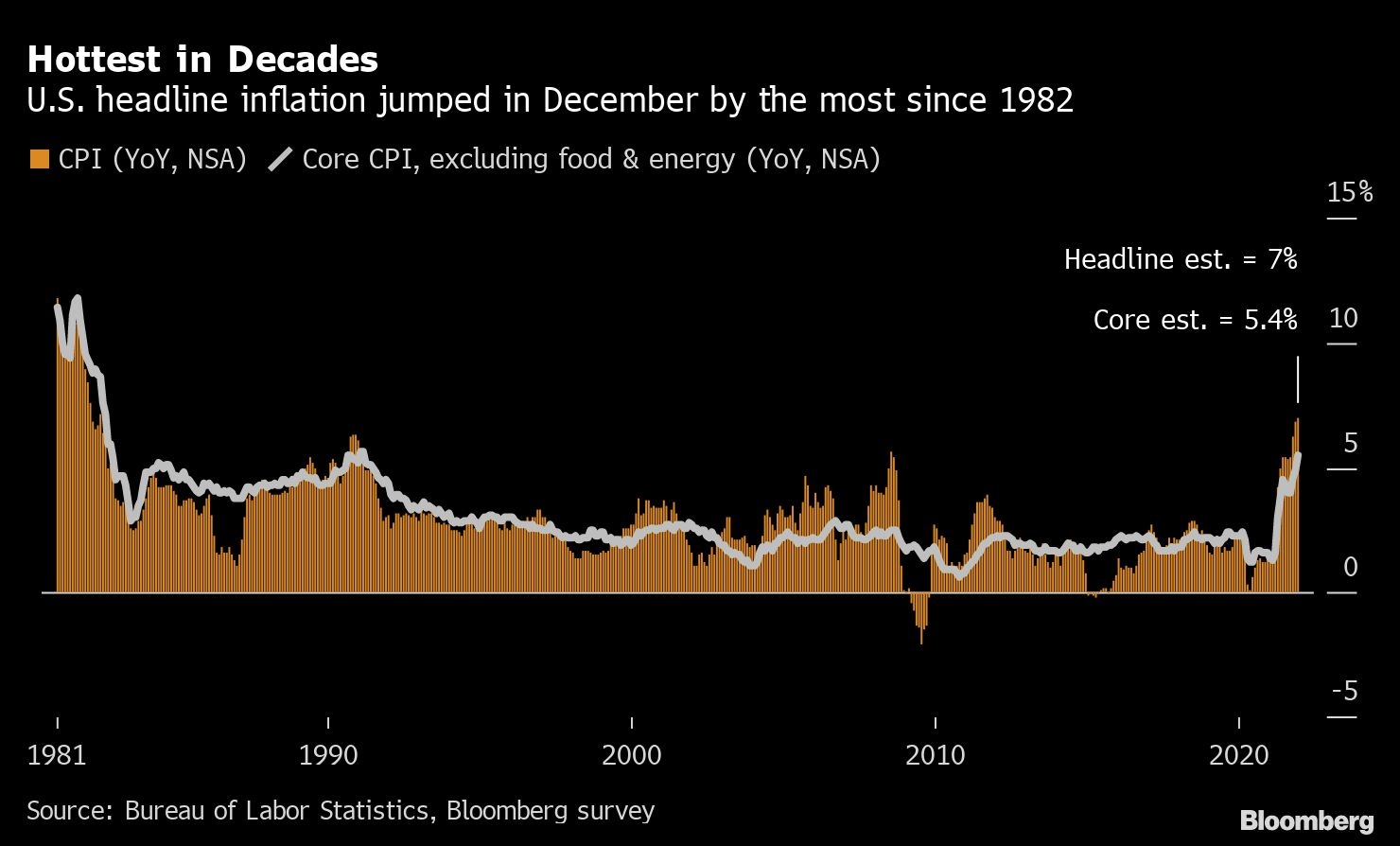 Excluding the volatile food and energy components, so-called core prices accelerated from a month earlier, rising by a larger-than-forecast 0.6 per cent. The measure jumped 5.5 per cent from a year earlier, the biggest advance since 1991.

The increase in the CPI was led by higher prices for shelter and used vehicles. Food costs also contributed. Energy prices, which were a key driver of inflation through most of 2021, fell last month.

The data bolster expectations that the Fed will begin raising interest rates in March, a sharp policy adjustment from the timeline projected just a few months ago. High inflation has proven more stubborn and widespread than the central bank predicted amid unprecedented demand for goods along with capacity constraints related to the supply of both labor and materials.

Meanwhile, the unemployment rate has now fallen below 4 per cent. Against this evolving backdrop, some Fed policy makers have said that it could be appropriate to begin shrinking the central bank’s balance sheet soon after raising rates.

Market expectations for Fed tightening expected in March and 2022 as a whole were largely unchanged after the report. Yields on 10-year Treasuries remained lower with the dollar, while the S&P 500 opened higher.

“In terms of where the Fed is on their dual mandate -- inflation and the labor market -- they’re basically there,” Michael Gapen, chief U.S. economist at Barclays Plc, said on Bloomberg Television. “I don’t really think anything stops them going in March except one of these kind of outlier events. I think they’re ready.”

The energy index declined 0.4 per cent from November, the first monthly decline since April as gasoline prices slid. Food inflation climbed 0.5 per cent, a slight deceleration from the previous month due to falling costs for meats.

Desperate to fill open positions, businesses are increasing pay to attract and retain workers, particularly at the lower end. But rising prices are eroding those wage advances. Inflation-adjusted average hourly earnings dropped 2.4 per cent in December from a year earlier, the biggest drop since May, separate data showed Wednesday. However, compared with a month earlier, they rose 0.1 per cent, the first gain in three months.

“The December CPI showed strong demand and supply bottlenecks still at play, with goods inflation driven higher by auto and apparel prices. A step-down in services prices may prove misleading, with shelter costs set to be a growing source of upward pressure in 2022.”

Shelter costs -- which are considered to be a more structural component of the CPI and make up about a third of the overall index -- rose 0.4 per cent from the prior month. Other gauges of home prices and rents have surged last year, likely presaging a sharp acceleration in the report’s housing metrics this year and offering an enduring tailwind to inflation. 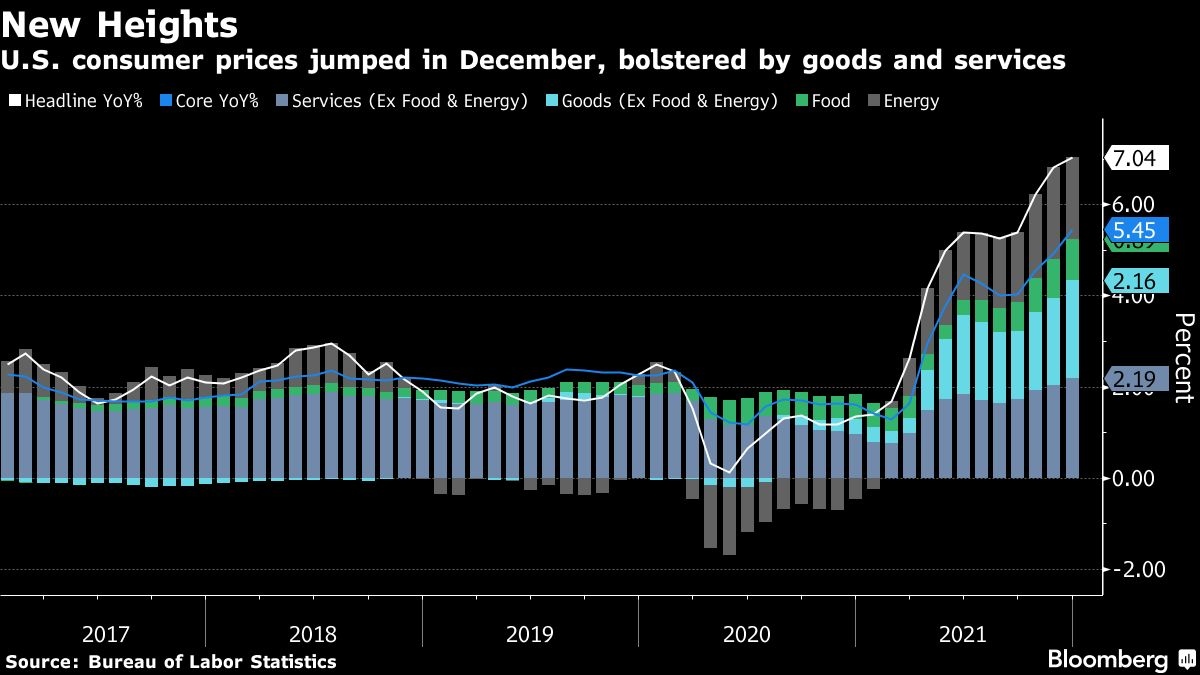 Omicron -- the dominant COVID-19 variant in the U.S. -- is poised to further disrupt already fragile supply chains as quarantines and illness prevent some employees from going to work. Spending on services like travel may slow, pushing down prices, but goods prices may move higher.

Nonetheless, the impact is expected to be temporary. Economists expect CPI growth to moderate to around 3 per cent over the course of 2022, which will depend on supply chains normalizing and energy prices leveling off. However, higher rents, robust wage growth, subsequent waves of COVID-19 and lingering supply constraints all pose upside risks to the inflation outlook.

The persistently high inflation is also likely to maintain a high hurdle for President Joe Biden and Democrats to revive their roughly US$2 trillion tax-and-spending package, after a key lawmaker, West Virginia Senator Joe Manchin, objected to the legislation in part because of the surge in prices.

On a December-December basis, the increase in the CPI was the largest advance since 1981.

The inflation environment changed markedly in 2021 compared with the prior year when a pandemic-related slowdown in demand led to the smallest calendar-year gain in the CPI since 2015.