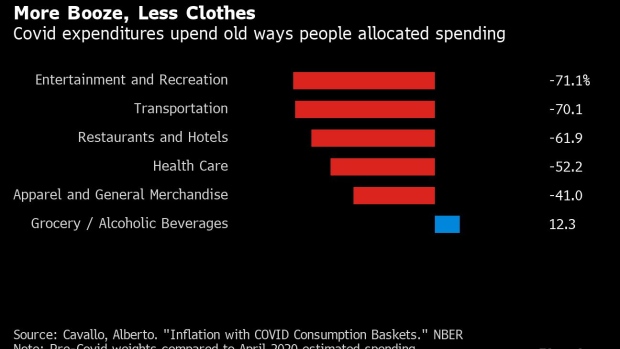 (Bloomberg) -- Financial markets are obsessed with where inflation is headed. Statisticians are struggling to figure out where it’s at.

The pandemic has created major headaches for the people whose job it is to determine the rate of inflation right now, and set the benchmarks that will be used to measure it in the future. They face two fundamental problems.

First, gauges like the Consumer Price Index are based on a “basket” of stuff that Americans typically spent their money on in the past –- which looks quite different from what people have been buying in the pandemic year.

Second, the standard way of compiling inflation numbers is to visit stores and check their asking prices. Researchers haven’t been able to do that during lockdown, leaving holes in the data. And a lot of shopping has in any case shifted online, where prices can be tailored to individual shoppers and subject to rapid change –- making them harder to measure.These are more than just technical issues. The incomes of almost 80 million Americans, from recipients of social security and food stamps to workers in collective wage agreements, are tied in some way to the CPI. When it fails to capture changes in the cost of living, their budgets can get squeezed. (The Federal Reserve uses a different measure of inflation, based on more up-to-date spending patterns, so its interest-rate decisions are less affected by the measurement problem.)

The basket problem is the immediate challenge for the inflation technicians.“In effect, CPI weights suffered sudden obsolescence when the pandemic arrived,” Marshall Reinsdorf, an economist in the International Monetary Fund’s statistics department, said in a November presentation.

For example, dining out accounts for 6.3% of the U.S. CPI basket –- but Reinsdorf estimates that a measure of spending habits during the pandemic would have lowered that weighting by almost half. Meanwhile, Americans have been spending more on food at grocery stores, where prices accelerated last year.

Economist Alberto Cavallo, who teaches at Harvard Business School, has created a U.S. inflation gauge for the Covid-19 era, using a basket based on credit-card transactions that reflect what Americans have been buying. It has consistently delivered a higher reading than the official CPI, and topped 2% last month for the first time since the pandemic began.

In the normal run of things, the Bureau of Labor Statistics -– which compiles the headline inflation numbers in the U.S. –- would update its CPI basket at the start of next year to reflect 2020 consumption patterns. But that could create new problems –- by enshrining untypical spending habits as a benchmark for future inflation.

The bureau is considering adjusting its usual procedures, BLS economist Jonathan Church said by e-mail. Alternatives include pretending 2020 never happened and sticking with data from prior years, or adjusting the Covid-era numbers based on secondary sources, says Randal Verbrugge, a senior economist at the Federal Reserve Bank of Cleveland. Either way, there’s a risk of introducing further mismeasurements.Global peers face similar problems. The Organization for Economic Cooperation and Development is due to publish some advice for member states.The second issue revolves around data collection. The BLS employs about 400 researchers who collect information about prices via two main surveys: one is focused on businesses that sell goods and services, and the other asks landlords and tenants about rent payments.Before the pandemic, more than 70% of data in the first survey -- and some 40% of the second one -- was compiled during in-person visits, a mix that had been fine-tuned over the years. But last month, 84% of the price data was collected online, with the rest coming from telephone surveys -– while the rent survey was conducted entirely by phone.

“These factors resulted in an increase in the number of prices considered temporarily unavailable and imputed,” the bureau said in its latest CPI report. “Many indexes are based on smaller amounts of collected prices than usual.”

The prices of peanut butter, lemons and broccoli were left blank in the national numbers for February. The data on new-car prices in Detroit, known as Motor City, was deemed “inadequate for publication.”

While the price inspectors should soon be able to go back to the stores, consumers may choose not to. The shift to e-commerce accelerated during the pandemic: it accounted for 19% of core U.S. retail sales in the fourth quarter of 2020, up almost 4 percentage points from a year earlier.

Competition between online and traditional retailers is reckoned to put downward pressure on inflation. But Harvard’s Cavallo says his index of online prices has been rising rapidly since November, a shift that hasn’t been reflected in the CPI.

And broader problems with measurement may emerge, because online sellers can easily customize prices for individual buyers and adjust them thousands of times a day via algorithms.“It does pose a challenge for a statistical agency,” says Verbrugge at the Cleveland Fed. “How do they get their hands on the actual prices that consumers are being charged?”