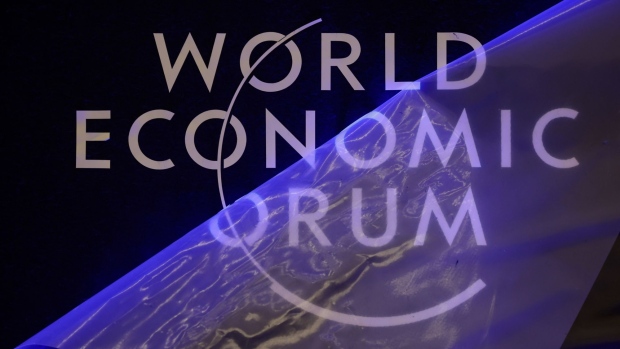 (Bloomberg) -- Pressure from rising prices isn’t likely to let up any time soon, the head of the world’s largest manufacturer of wind turbines said, adding to the grim warnings at the World Economic Forum in Davos.

The war in Ukraine has overshadowed the first in-person gathering in the Swiss Alps in two years. Food shortages, climate change and migration risks have also been high on the agenda.

Join us here throughout the day for rolling coverage, and tune into Bloomberg TV for interviews with EU Economy Commissioner Paolo Gentiloni, Irish Prime Minister Micheal Martin, Carlyle Group’s Macky Tall and many others. The WEF is taking place under the shadow of the war in Ukraine after a two-year hiatus due to the pandemic, although with fewer world leaders and major figures from finance and politics.

Ukrainian Foreign Minister Dmytro Kuleba said he saw no desire from NATO now to help secure safe passage of grains through the Black Sea, an effort seen as crucial to counter concerns about food shortages and rising prices.

“If NATO did not close the Ukrainian skies in the most tragic moments of the war, why should they dare to close the Ukrainian sea to allow the free passage of vessels with Ukrainian agricultural products,” he said. “I would wholeheartedly welcome the decision, but I just don’t see the stamina and the bravery to take all the risks associated with this operation.”

The interruption of the agricultural cycle of Ukraine risks a multi-year global food crisis, Kuleba told a breakfast organized by the Victor Pinchuk Foundation, “but in the end, the problem is that you cannot trust Russia even if they sign papers guaranteeing safe passage.”

There’s upward pressure in wages in all markets and more so in the US than in Europe, said Randstad NA Chief Executive Officer Sander van’t Noordende in an interview with Bloomberg TV. Van’t Noordende said wage inflation is reaching 5% in US and is around 3% in Europe.

Now that “everybody knows that virtual working works” more people are looking for flexibility and to be able to work from home some of the time, he said. “Spending time together is still important, but it depends on what team you’re part of and what the moment is to be together.”

The head of the employment services provider said 70% of Millennials are looking for a new job as opposed to 40% of older generations.

Inflation May Be Here for Years, Vestas CEO Says (8 a.m.)

“I don’t see it easing,” according to Andersen, who runs the world’s largest manufacturer of wind turbines. “We have to now get used to that this could continue not only for quarters to come but also for years to come.” Higher costs for materials and transport have erased profits for the wind-turbine industry just as it’s needed to ramp up to achieve global climate goals. Andersen said his company will return to making money once supply chain issues have been normalized.