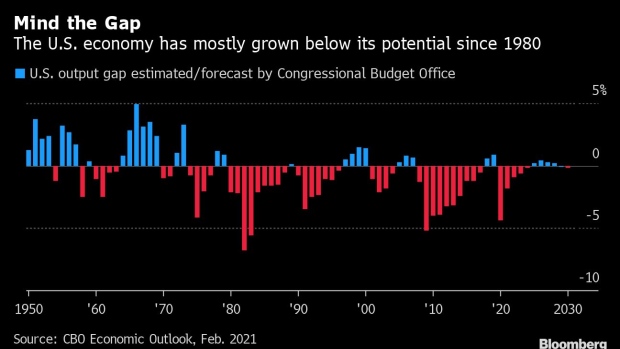 (Bloomberg) -- Economics used to offer lots of metrics that claimed to show when growing economies were approaching some kind of speed limit. But increasingly, inflation is the only one that’s taken seriously.A lasting surge in prices would likely convince policy makers that it’s time to tap the brakes on expansionary measures adopted in the pandemic, like high public spending or low borrowing costs. That’s why Tuesday’s consumer-price data in the U.S. will be so closely watched -- though it’ll take more than a single month’s numbers to change minds.

Meanwhile -- as part of a profound shift in economic thinking that’s gathered pace in the past year -- a whole range of other indicators once relied on to flag trouble ahead are falling out of favor.

Budget deficits and public debt were thought to flash a warning sign at certain levels -- until plenty of countries exceeded those limits, especially in the last year, without crashing. Estimates for full employment, or the most jobs an economy could create without overheating, turned out to be wrong.

Measures of the so-called “output gap” are supposed to capture how close an economy has gotten to its maximum capacity -- but many analysts have concluded that they rely too much on the recent past to be a useful guide.

Abandoning or downplaying all of these yardsticks means officials are less likely to take the kind of pre-emptive action that’s choked off expansions in the past.The shift also amounts to a pivot toward humility, in a profession not famous for it. Economists used to be comfortable with offering their predictions as a basis for policy. They’re having to acknowledge that the future is full of things they simply do not know.“The influence of long-term projections has evaporated, and that’s a very good thing,” says James Galbraith, a professor of economics at the University of Texas. “You design policies to deal with the problems you have. If they have consequences later, you address them later.”

That philosophy underpins the Federal Reserve’s new interest-rate framework. Last decade, the central bank began raising borrowing costs even though inflation was subdued and unemployment was still around 5% post-financial crisis.

Now, Fed officials effectively concede that was a mistake, because lower unemployment didn’t trigger a spike in prices. And now they say they’ll base policy on what’s actually happened in the economy, rather than what’s expected to come next.

Three times in a speech last month, Federal Reserve Governor Lael Brainard contrasted “outcomes” with the “outlook” -– and said Fed policy will be based on the former, not the latter.

In fiscal policy too, there’s been a rethink of speed limits.Budget deficits and national debt as a share of the economy used to be the go-to metrics. The European Union imposed 3% deficit caps. Economists Carmen Reinhart and Ken Rogoff, in an influential study a decade ago, argued that debt at 90% of GDP was a dangerous tipping point.

This kind of thinking led to austerity policies after the initial shock of the 2008 financial crisis -- and the result was a weak recovery. But budget forecasts tended to be too pessimistic because they didn’t anticipate that interest rates would remain low.

In the pandemic, governments have been more willing to spend, especially in the U.S. President Joe Biden is pushing measures worth more than $5 trillion during his first year –- fuel for what already looks set to be a faster rebound in the economy.

In some ways, the new approach aligns with the school of thought called Modern Monetary Theory. MMT says governments have room to rev up their economies with fiscal spending, and argues that inflation -- rather than deficit or debt levels -- is the metric that budget authorities need to keep their eye on.“One thing the mainstream has caught on to is allowing the economy to run a bit hotter,” says Scott Fullwiler, an MMT economist and associate professor at the University of Missouri-Kansas City. “That’s the thing we’ve been hitting on for decades.”Unfortunately, says Fullwiler, economists haven’t devoted enough attention to the question of what a safe maximum speed would be -- and have focused too much on central banks, even though it’s now fiscal policy that is driving recoveries.“The economics profession in general has far and away enough capacity to figure out how hot the economy can run,” he says. It would have better answers right now “if economists had been working on fiscal-policy frameworks for stabilizing the economy and keeping inflation low, instead of optimal monetary policy, which is basically irrelevant.”

In the U.S., opponents of Biden’s spending have invoked the “output gap” -- the difference between the goods and services an economy is actually producing, and the maximum it could sustainably manage.

Former Treasury Secretary Larry Summers and the Committee for a Responsible Federal Budget, for example, both argued that last month’s stimulus bill was much bigger than what was needed to close that shortfall -- and risked triggering inflation as a result.But many analysts are skeptical about the measure. Robin Brooks, chief economist at the Institute of International Finance, has been leading a campaign against “nonsense output gaps” for years.The output gap is “a massively important concept” that underlies all the big policy calls, he says. “Nobody has any clue about how to measure it.”

Output gaps rely on estimates of an economy’s potential. A small shortfall means production is reckoned to be getting close to its speed limits, and trying to make it go faster could set off inflation.

But Brooks says that potential is often calculated simply by looking at what happened in the recent past. He says that when a country has been under-performing for an extended period, like Italy in recent decades, the result is that its potential gets downgraded too -- effectively putting a cap on how good things should be allowed to get.

In a February report, Goldman Sachs economists tried an alternative way of measuring, and concluded that output gaps in major economies from Italy to the U.S. were likely bigger at the end of last year than official estimates suggested -- meaning that there was “more slack,” less risk of inflation and a stronger case for expansionary policy.

Since then, the U.S. recovery has gained pace, surprising many analysts.

Galbraith, who was director of the Joint Economic Committee of Congress during the recession of the early 1980s, says emergencies aren’t the right time for policy makers to attempt any kind of precision forecasts.“You don’t try to calculate these things,” he says. “You throw at it as much as you need, and more. And then, if it turns out that you’re doing too much -- which is improbable -- you scale it back.”