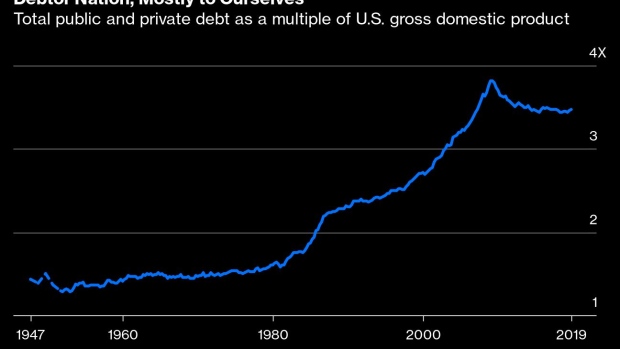 (Bloomberg Opinion) -- The coronavirus pandemic and the depression that follows will leave the U.S. with a lot of unpayable debts. Consumers who lose their jobs will have difficulty making payments on credit cards, auto loans and student loans. Businesses that lose sales will default on loans and bonds.

In a bygone era when the economy was less dependent on a web of debt obligations, this might not have mattered as much. But the U.S. economy has loaded up on debt over the years:

This doesn’t mean that the U.S. is living beyond its means; the vast majority of this borrowing is money that Americans owe to each other. But it does indicate that the modern economy is built on a sort of just-in-time financial supply chain, in which the solvency of businesses and households depends on the prompt arrival of a vast number of debt-service payments from other businesses and households. Disrupt that delicate web and much economic activity can grind to a halt. This is probably why asset bubbles hurt the economy a lot more when they’re accompanied by high levels of debt. Coronavirus, of course, will be worse than any asset bubble.

The damage to the web of debt will hamper the U.S. economy’s recovery. Businesses that survive with diminished revenue will struggle for years to pay down debt before they’re able to start investing and expanding again. Debt will likewise hold companies back from changing their business models to better fit the demands of the post-pandemic economy. Workers burdened by debt will have a harder time switching jobs or going back to school, making the labor market less efficient at allocating talent to where it needs to go.

Bailouts are one potential solution. By turning business and household debt into government debt, the Treasury can effectively consolidate the complex web of debt into a simpler relationship. But bailouts will inevitably be politicized, as they were in the aftermath of the 2008 crisis; everyone will argue that they deserve bailouts more than others, and many will be resentful at the eventual allocation of government largesse. Fighting over the spoils could in turn make bailouts much smaller than they ought to be; this happened in 2009, when Tea Party anger steered the government away from bailing out most homeowners.

But there’s another way that the government can shrink the mountain of debt weighing down the U.S. economy: inflation. Because most interest payments are fixed in nominal terms, inflation makes existing debt less important in real terms. Raising the long-term inflation target from the current 2% to a still-modest 4% would substantially increase the rate at which debt effectively vanishes.

The U.S. has used inflation this way before. Economists Joshua Aizenman and Nancy Marion wrote:

A decade of 4% inflation today would do the same for total debt, not just government debt.

There are some difficulties and challenges inherent in this approach. First, inflating away debt is an act of redistribution from lenders to borrowers; creditors will oppose having their assets eroded. This anger might be blunted by reminding creditors that inflation also reduces the real value of the taxes they’ll have to pay to service government debt.

Second, hard-money advocates, including older economists who remember the high inflation of the 1970s, will fret that inflation could spiral out of control. This probably shouldn’t be a concern. The Fed has shown little difficulty in convincing the world that it’s committed to its 2% inflation target. As long as the Fed made it clear that 4% wouldn’t eventually become 6% or 8%, it would be able to hold the line at the new higher rate.

A third worry is that higher inflation could erode real wages. Theoretically, wages rise faster to keep pace with prices when inflation is high. But in the real world, this depends on worker bargaining power. And decades of weakened unions and rising industrial concentration have weakened worker power. The big overhang of unemployed workers in the coming depression will weaken it even further. The situation now is very different from the postwar period when strong unions and full employment made sure that wages kept pace.

So an elevated inflation target needs to be paired with higher minimum wages, policies to strengthen unions and other measures to encourage employers to raise pay. The government could even use wage-matching policies to raise pay across the board (rather than just for essential workers, as some now are proposing).

A final concern is whether the Fed could actually hit the 4% target. The Bank of Japan has been trying mightily to raise inflation for years with only modest success. If businesses don’t raise their prices in response to the Fed’s new target, inflation just won’t happen.

But it’s worth a try. Despite the challenges, a long period of 4% inflation could do a lot to simplify the intricate and complex web of debts that the U.S. economy built up in the years before the pandemic. A higher inflation target should be part of the policy menu for getting the economy back on its feet.