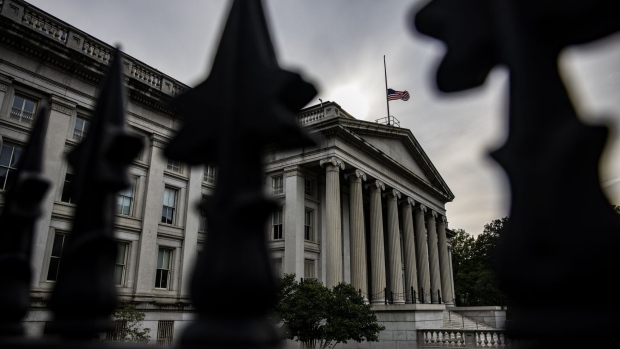 The U.S. Treasury building in Washington, D.C., U.S., on Sunday, Oct. 3, 2021. The global economy is entering the final quarter of 2021 with a mounting number of headwinds threatening to slow the recovery from the pandemic recession and prove policy makers' benign views on inflation wrong. Photographer: Samuel Corum/Bloomberg , Bloomberg

(Bloomberg) -- The current surge in inflation isn’t just hurting household finances. The U.S. Treasury had to shell out some $113 billion in extra payments on debt securities tied to the consumer price index.

Treasury inflation protected securities, or TIPS, pay investors not only a regular coupon as do other notes and bonds, but also offer compensation for higher consumer prices. That means when the CPI climbs, the federal government’s interest costs also rise.

Accelerating inflation meant the Treasury paid out $113 billion more on TIPS in the fiscal year through September than in the previous year, Treasury Department officials told reporters on a call Friday.

Historically low yields on regular Treasuries meant that debt-servicing costs for those went down for the 2021 fiscal year -- by $73 billion, the officials said. That’s despite the fact the overall amount of debt outstanding increased.

The dollar-weighted average yield on Treasuries dropped from a year earlier by 17 basis points, to 1.61%, as of the end of September, the officials said.