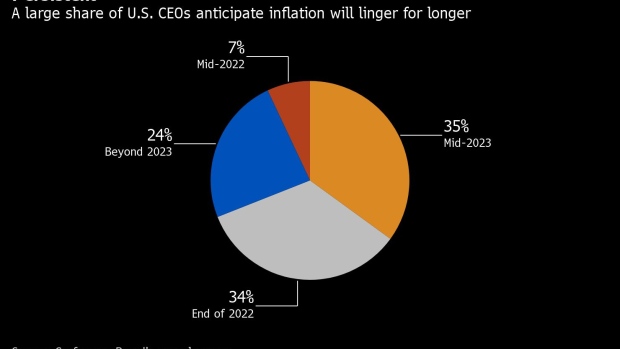 NEW YORK CITY - JANUARY 12: People walk through a shopping mall in Manhattan on January 12, 2022 in New York City. Newly released data shows that inflation grew at its fastest 12-month pace in nearly 40 years during the month of December. It showed a 7% jump from a year earlier, as prices rose on everything from gas to furniture for American shoppers. (Photo by Spencer Platt/Getty Images) , Photographer: Spencer Platt/Getty Images North America

(Bloomberg) -- A barrage of upcoming data on the U.S. economy, wage growth and prices is poised to turn up the temperature of an already-heated debate about the persistence of inflation.

The employment cost index, which Federal Reserve Chair Jerome Powell cited in December as a key reason for the central bank’s pivot to a more aggressive stance on inflation, is seen registering a fourth-quarter gain nearly on par with the record increase in the prior three months.

Separate government reports are forecast to show that the Fed’s preferred price gauge advanced at the fastest annual pace in nearly 40 years and that economic growth improved as 2021 drew to a close.

“If the transitory story hasn’t already been completely demolished, further evidence of building wage pressures and wage inflation should really put the final nail in the coffin on that story,” said Michael Feroli, chief U.S. economist at JPMorgan Chase & Co. “That’s how we normally expect inflation to build, not through some issues with semiconductor factories or ports.”

That explains why Fed policy makers this afternoon are expected to signal they’re ready to raise rates in March.

Economists expect inflation metrics to ease this year as supply-chain issues normalize, but to what extent that actually happens depends greatly not just on supply chains but also on wages. The rapid pace of inflation seen in recent months reflects a combination of things, including transportation bottlenecks, capacity constraints and stimulus-fueled demand for goods.

A host of factors including Covid-19 infections, child care responsibilities and early retirements have whittled down the nation’s pool of available workers, and businesses across the country have been bidding up wages to attract and retain employees. For many companies, that’s feeding into higher prices for consumers.

Paint maker Sherwin-Williams Co. is raising prices by 12% next week to offset higher costs. Labor costs are accelerating faster than prior years and some workers are seeing wages rise by double digits, the company said on a Jan. 14 call.

“No one is happy with price increases right now, but this is a market where our customers are pushing the pricing through,” Chief Executive Officer John Morikis said on the call.

A January survey by the National Association for Business Economics showed more than half of respondents said their companies boosted prices in the fourth quarter. And many businesses don’t see inflationary pressures disappearing any time soon.

Over half of CEOs globally expect elevated inflation to last into 2023 or beyond, according to a survey by the Conference Board. On a recent earnings call, Procter & Gamble Co. CFO Andre Schulten said, “Inflationary pressures are broad-based with little sign of near-term relief.”

Monthly figures on Friday are currently projected to show the personal consumption expenditures price index climbed 5.8% in December from a year earlier, the most since 1982. That’s nearly three times the Fed’s target rate.

High prices, concerns about supply chains and a surge in Covid-19 cases at year end have also impacted consumer spending. Consumption likely picked up in the fourth quarter compared to the prior period, but a pullback in spending in the final month of the year indicates limited momentum for early 2022 growth.

Gross domestic product, due Thursday, probably grew an annualized 5.3% in the final three months in the year, largely reflecting the restocking of depleted company inventories.

Powell has said the Fed is closely watching for any signs of a wage-price spiral, a term used to describe a self-feeding loop in which workers ask for higher wages to help offset inflation’s impact on their purchasing power. In an effort to protect profits, businesses then raise prices further, fueling the cycle.

This is just the beginning of a wage recovery, so it remains to be seen if a wage-price spiral is taking hold, said Brett Ryan, senior U.S. economist at Deutsche Bank AG. “That’s a different story, and that takes a while to play out.”

But “it’s another sign for the Fed that they are at -- if not very near -- their maximum employment objective,” Ryan said.

The ECI is a broader measure of compensation and reflects changes in both wages and salaries as well as benefit costs. And unlike the earnings measure released in the monthly jobs report, the ECI is not distorted by employment shifts among occupations or industries. The third-quarter increase of 1.3% was the biggest in comparable data back to 2001.

Overall, the ECI was up 3.7% in the 12-month period that ended in September. Wages and salaries increased 4.2% over the same period.

Many economists expect Fed officials to announce a 25-basis-point interest-rate increase in March, which would be the first hike since 2018. But Bloomberg Economics’ Anna Wong says a greater-than 4.5% annual gain in wages and salaries in Friday’s ECI report is the kind of thing that could switch a 50-basis-point hike in March from a remote possibility to potentially on the table.

“They are very worried about the wage-price spiral,” Wong said.